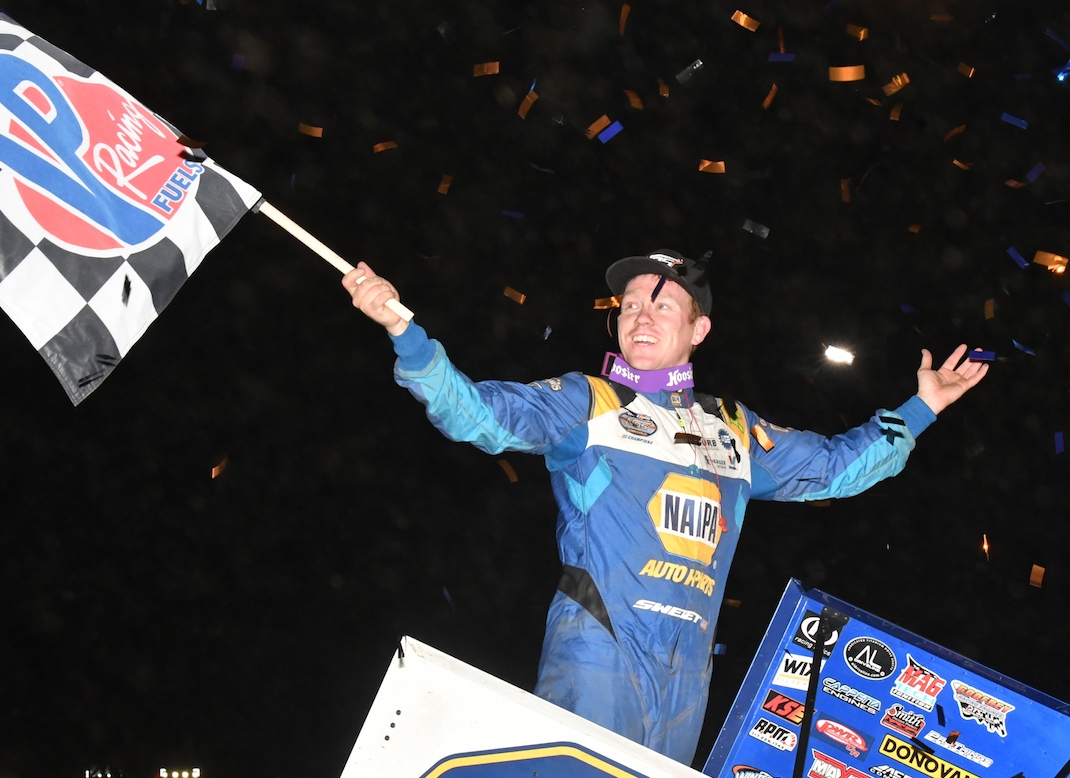 It was the eighth victory of the season for Sweet, crew chief Eric Prutzman and the Kasey Kahne Racing with Mike Curb No 49 team.

“Sheldon was way better than us throughout most of that race, but you have to finish these off,” Sweet said. “He left a little opening and got the tires spinning down the front stretch and I saw a gap to shoot. Sometimes it doesn’t matter how you get there, just as long as you get there first.”

After losing Thursday’s trip to Jacksonville Speedway in heartbreaking fashion due to a cut tire with eight laps to go, Haudenschild was seeking redemption. For 27 laps on Saturday night, he could taste that sweet, sweet redemption; until Sweet himself stole it away.

Haudenschild mastered traffic and was poised to celebrate a third win of the year until a spinning Tim Kaeding halted his torrid pace with three laps to go.

As untimely as it was, it didn’t help anymore that two-time and defending Series champion Brad Sweet had just taken second away from Zearfoss.

All it took was a stellar restart to offer Sweet the launch he needed into turn one to clear Haudenschild with a slider for the lead. From there, he survived an additional two laps and crossed the stripe with an advantage of 1.508-seconds over Carson Macedo, who snookered Haudenschild as well.

The win marked Sweet’s third in three nights, his fifth in five Missouri races, his eighth in 18 events. His 66th World of Outlaws victory tied him with Craig Dollansky and Bobby Davis Jr. for 12th all-time.

“We’ve still got a long summer ahead of us with a lot of big races left,” Sweet said. “We’ve got to keep our heads down, keep capitalizing, keep executing, and keep winning. We’re the best team out here and I feel like I’m at the highest level I’ve ever been at as a driver. I want to win as many as possible this year.”

Following Sweet by Haudenschild to take second on the final restart was Carson Macedo, who drove the Jason Johnson Racing No. 41 to his tenth consecutive top-10 finish.

“Our car was really good, but I just felt like there were parts where we fell in in line and I couldn’t make something happen,” Macedo noted on his race. “I found the rubber before Brock [Zearfoss] because of a lapper, and then Sheldon [Haudenschild] got so tight on the bottom I got by him. Looking forward to a weekend at Eldora next!”

“We just got beat,” Haudenschild admitted. “I let my guys down. We had the winning car, but the driver didn’t get it done. It doesn’t matter how many you lead, we have to hang on for that last lap. I got too snug on that restart and let Brad get by. He’s the guy to beat right now and that’s really motivating us to get better.”

Kyle Larson and Donny Schatz rounded out the top five.