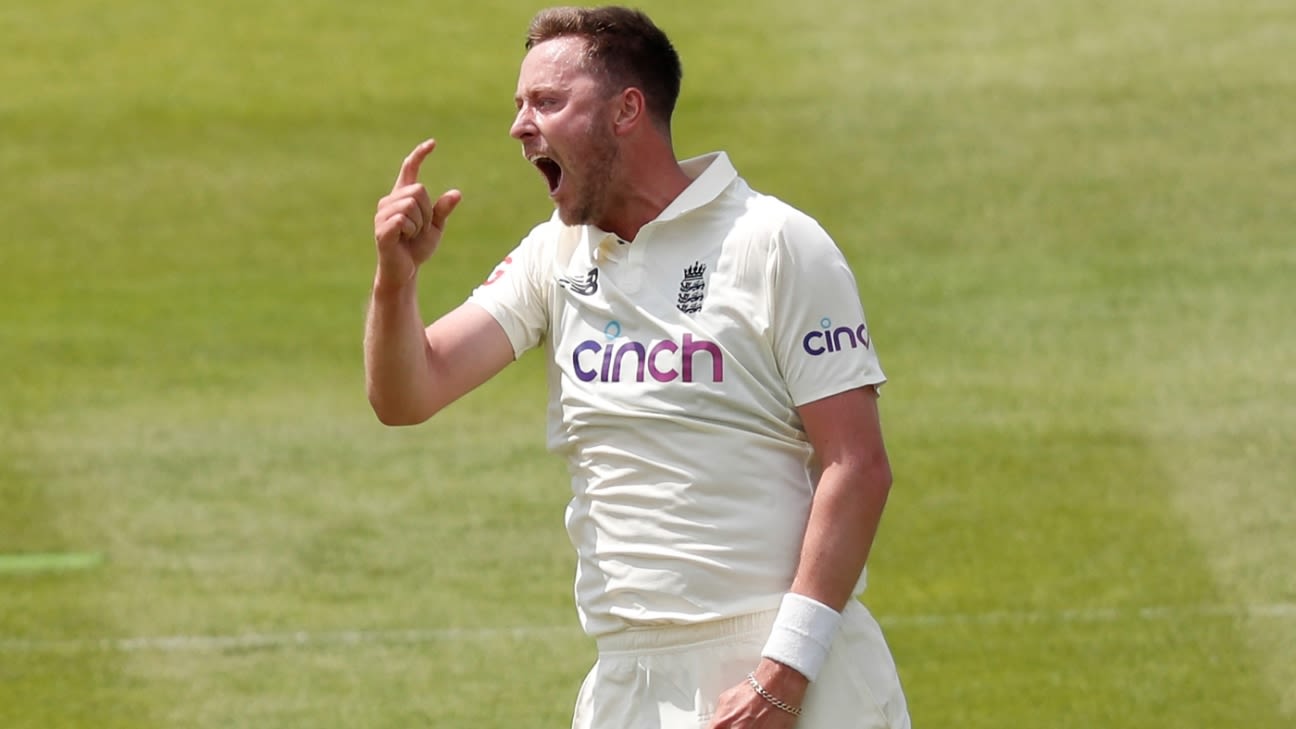 Ollie Robinson has been recalled to England's Test squad in the wake of his suspension during the New Zealand series, as Chris Silverwood, the head coach, named a 17-player squad for the opening two Tests against India, starting at Trent Bridge on August 4.
Also included in the squad are Jonny Bairstow, Jos Buttler and Sam Curran, all of whom were rested for the New Zealand series in the wake of their involvement in this year's postponed IPL, along with Ben Stokes, who captained England's 50-over side against Pakistan earlier this month after a Covid outbreak caused the original squad to self-isolate, but who admitted last week that the finger that he broke back in April is still not fully healed.
Notable absentees include Jofra Archer, who made his playing return for Sussex in the Vitality Blast this week, but who is continuing to recuperate from elbow surgery, and Chris Woakes - England men's reigning player of the year - who has sustained a bruised heel. Woakes' absence for the first two Tests means that it will have been more than a year since his most recent Test appearance, against Pakistan at the Ageas Bowl in August 2020. Olly Stone and Ben Foakes also remain sidelined through injury.
Elsewhere in England's ranks, Haseeb Hameed is once again included as a batting option, and may vie with Dom Sibley, Rory Burns and Zak Crawley for a top-three berth, while Ollie Pope is also named despite sustaining a thigh injury while batting for Surrey in the Blast earlier this month. Dan Lawrence, whose unbeaten 81 at Edgbaston was one of the few high spots in a disappointing display from England's batters, is also retained. There is no place in the squad for James Bracey, who endured a gruelling debut series against New Zealand last month, nor for Dawid Malan, who has been mooted as an option at No. 3 ahead of a winter Ashes tour.
On the bowling front, James Anderson and Stuart Broad are both included alongside Mark Wood, who is now expected to be ruled out of the entirety of London Spirit's Hundred campaign. Dom Bess and Jack Leach are both selected as spin options, with Bess having bounced back from his tough tour of India with career-best first-class figures of 7 for 43 for Yorkshire against Northants earlier this month. Craig Overton, who was named in the squad for the New Zealand series, misses out on selection, as does Saqib Mahmood despite his impressive limited-overs performances.
The rest of the Test players featuring in the Hundred will be available to their teams for two matches each, including Bairstow, whose return to the Test fray will require his Welsh Fire head coach, Gary Kirsten, to identify a new captain at short notice. The squad will then report to Loughborough on Wednesday, July 28, a week in advance of the Trent Bridge Test.
"A home Test series against India is one of the most anticipated red-ball series and this promises to be an outstanding five Tests," Silverwood said. "India are a quality team who have shown their ability to get results away from home. We are expecting a highly competitive series and have selected our strongest possible squad.
"The returns of allrounders Ben Stokes and Sam Curran provide balance that allows us to get back to a structure that has been successful in Test cricket.
"Ben's leadership in the Royal London Series, when he played despite his finger not yet being 100 percent, typified his character and commitment that drives the players around him forward. With Jos and Jonny back in the squad we have added further experience and quality that will be needed against the world's second-ranked team."
Robinson, who claimed seven wickets and scored a valuable 42 on his Test debut against New Zealand at Lord's in June, was withdrawn from the squad ahead of the second Test of that series at Edgbaston, following the emergence of historic tweets of a discriminatory nature. He was handed an eight-match suspension - with five of those suspended for two years - and fined £3200, and the ECB now consider the matter closed.
"We have selected Ollie Robinson after his seven-wicket Test debut against New Zealand," Silverwood confirmed. "Ollie proved in that Test that he has the ability to replicate his outstanding form in the County Championship at international level and we will continue to work with him to develop his England career."
England Men's Test Squad: Joe Root (capt), James Anderson, Jonny Bairstow, Dom Bess, Stuart Broad, Rory Burns, Jos Buttler, Zak Crawley, Sam Curran, Haseeb Hameed, Dan Lawrence, Jack Leach, Ollie Pope, Ollie Robinson, Dom Sibley, Ben Stokes, Mark Wood
Ollie Robinson
Jonny Bairstow
Jos Buttler
Sam Curran
Jofra Archer
Chris Woakes
Haseeb Hameed
England
India tour of England

More in this category: « Avesh Khan all but out of England tour Bangladesh expect Liton Das and Mustafizur Rahman to be fit for 'second or third game' against Australia »
back to top