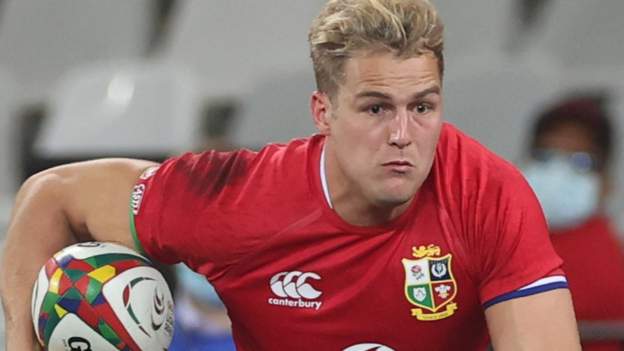 British and Irish Lions wing Duhan van der Merwe has warned the Springboks they will be wasting their breath with trash talk about his South African heritage during Saturday's first Test.

The 26-year-old was born and raised in South Africa and played for South Africa Under-20s before qualifying for Scotland at Test level.

"People can say what they want to say," said the 6ft 4in powerhouse wing.

"I'm not bothered, I will just go out there and do my thing."

Gatland admitted that Van der Merwe's history means the Springboks "will be trying to hit him with everything they've got and there will probably be some verbals as well".

Van der Merwe was name-checked in a Springbok social media video welcoming the Lions to their country in various languages. RG Snyman, a former youth-level team-mate of Van der Merwe's, suggested he could translate the Afrikaans message.

"In any game you play you'll always get some verbal abuse, people getting stuck into you," said Van der Merwe. "I'm pretty used to it."

"I know I'm going to get a few boys holding onto me, pushing me here and there, but I'm just going to avoid and focus on my game."

Van der Merwe's hopes of appearing at Test level with the Springboks were ended by a string of injuries and fierce competition.

He told the Mail on Sunday in April that he had felt let down by South Africa and that "proving them wrong has always been a big motivation for me".

However, on the eve of the first Test, he struck a different tone.

"I've got nothing to prove to them," he said. "I don't have any sour grapes, anything like that. It's not about going out and showing them 'oh you guys should have kept me'.

"I am happy with how things worked out for me."

'One of the best in the world'

Van der Merwe will line up opposite Cheslin Kolbe, whose electric pace and vicious side-step have made him one of most potent attacking threats in world rugby.

But Van der Merwe, who trained alongside Kolbe during his time on South Africa's sevens programme, believes his own powerful, physical carrying will pose Kolbe problems as well.

"Cheslin is an amazing player - probably one of the best in the world at the moment," he said.

"His ability to beat boys one-on-one is amazing. It's just staying on top of him, not giving him too much time on the ball.

"When it's my turn on the ball and I have my shot at him, he needs to defend me. It's not just me defending him. You have to look at it both ways."