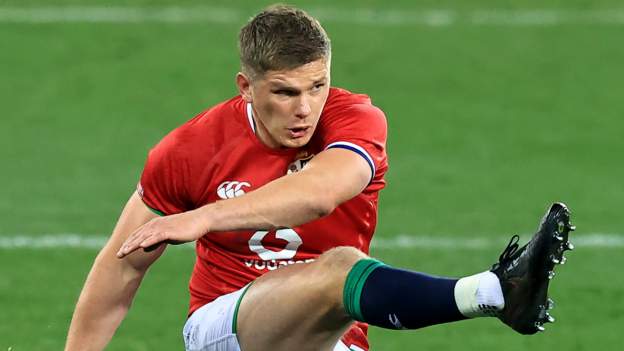 Former British and Irish Lions captain Brian O'Driscoll said the 22-17 win over South Africa in the first Test was the "ultimate game of two halves".

Trailing 12-3 at the break, the Lions recovered through the boot of Dan Biggar, before Owen Farrell kicked the winning penalty.

"I couldn't believe what I was watching," O'Driscoll told BBC Sport.

"We couldn't fire a shot and the Boks couldn't do a thing wrong, and then it turned around."

The Lions were punished for their ill-discipline in the first half as Handre Pollard kicked four penalties.

Luke Cowan-Dickie and Faf de Klerk exchanged tries after the interval before the hosts began to tire and lose the aerial battle as Biggar took advantage from the tee.

England captain Farrell was introduced off the bench and ensured victory with a late penalty, and ex-Ireland centre O'Driscoll said the Lions "earned the right" to turn the game around.

"The Boks will be better after that but they will be stewing that they lost a nine-point lead."

World champions South Africa are renowned for their physicality and set-piece power and made a bright start in Cape Town.

The Springboks had 57% possession and made 36 carries, compared to the Lions' 29, in the opening 40 minutes.

Their scrum was dominant and Cowan-Dickie's line-out wavered under pressure from Eben Etzebeth and Franco Mostert.

But Cowan-Dickie kickstarted the resurgence after the break when he gathered the ball from his own throw at the back of a rolling maul to score the first try of the three-match series.

The Springboks showed resilience, and Willie le Roux's try was chalked off before De Klerk dotted down, but Lions head coach Warren Gatland said his side got "stronger and stronger" as the game wore on.

"The message at half-time was that we were still in the arm-wrestle. We had given away a few soft penalties and allowed them opportunities," said Gatland.

"We knew we had to keep our patience and we would get chances. In the second half we got stronger and stronger and got ourselves back into the game.

"It was a really tight Test match and, thankfully, we have come from behind and finished really strongly."

Speaking in the week, Gatland said the impact of the bench would be critical in deciding which way the game went, and the New Zealander had the better options.

Props Mako Vunipola and Kyle Sinckler were introduced off the bench, while the experienced Farrell and Conor Murray pulled the strings from behind.

While the Lions' replacements added to their efforts, Gatland said the South African bench had less impact.

"The [starting] players all put in a really big shift and then the bench did really well," said Gatland.

"I thought the impact of our bench was probably more significant than their bench was."

While the Lions were much improved in the second half, they were helped by some key refereeing decisions.

The touring side had been left furious at the decision to have South African Marius Jonker as the Television Match Official after New Zealander Brendon Pickerill was unable to travel because of the Covid-19 pandemic.

But Jonker decided to disallow Le Roux's try after deeming the full-back was in front of Lukhanyo Am when the centre kicked through, despite on-field referee Nic Berry awarding the score.

Damian de Allende's try was also disallowed for an earlier knock on by Cheslin Kolbe and Gatland said those decisions could have impacted the result.

"A bounce of the ball could have gone either way, and a couple of calls as well," said Gatland.

"If they had been different it might have affected the result. We are happy with how we defended and we don't think they created a lot of attacking opportunities.

"Winning the game means, whatever happens, the series will go to the last weekend which keeps everyone engaged."