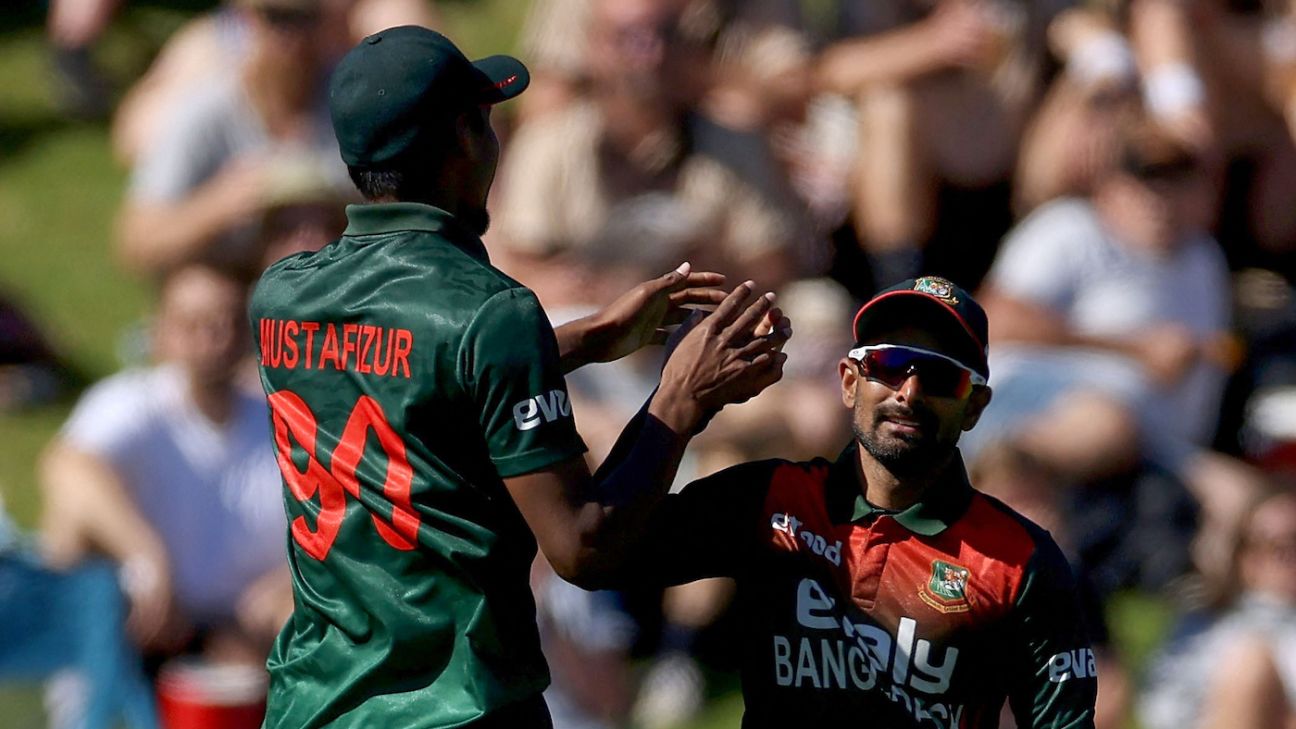 Liton Das and Mustafizur Rahman remain the main injury worries for Bangladesh ahead of their T20I series at home against Australia, which begins on August 3, but chief selector Minhajul Abedin expects the two key players to be available for selection for the third of five matches, to be played on August 6.
"Liton and Mustafiz should be available from the second or third game," Abedin told ESPNcricinfo. "We are not too worried about them. They will be back. Overall, we are confident about the squad. We have just won a T20 series [away against Zimbabwe]."
Das suffered a left thigh injury during the first T20I on July 20, and missed the remaining matches of the series. Rahman only played one ODI and one T20I during the tour after suffering an ankle injury on July 14 during a tour match. Apart from them, Soumya Sarkar is nursing a groin niggle from the third T20I on Sunday, while Shakib Al Hasan is understood to be managing a long-standing groin injury.
The selectors, however, don't have to announce a squad in advance - according to the playing conditions agreed by the two boards, the teams can only field players who have either been in quarantine in Dhaka since July 20, or been a part of the tours in Zimbabwe and, in Australia's case, the West Indies. For Bangladesh, the 18-man squad involved in the 2-1 series win in Zimbabwe will move directly to the team hotel in Dhaka after reaching the country on July 29.
Among those originally named in the Zimbabwe tour squad, Tamim Iqbal is out with a knee injury while Mushfiqur Rahim is out after he was forced to miss the July 20 quarantine deadline because of a family matter. Legspinner Aminul Islam is also out of contention after he travelled back to Bangladesh midway through the T20I series following the death of his father.
Bangladesh have added Taijul Islam, Rubel Hossain, Mohammad Mithun and Mosaddek Hossain, who were part of the ODI squad, to make up for the missing players in the T20I squad.
Bangladesh T20I squad: Mahmudullah (capt), Shakib Al Hasan, Liton Das, Nurul Hasan (wk), Taskin Ahmed, Shoriful Islam, Taijul Islam, Mohammad Naim, Mohammad Saifuddin, Mustafizur Rahman, Afif Hossain, Rubel Hossain, Mohammad Mithun, Mosaddek Hossain, Soumya Sarkar, Shamim Hossain, Nasum Ahmed, Mahedi Hasan.
Liton Das
Mustafizur Rahman
Bangladesh
Australia in Bangladesh

More in this category: « Battle between two uncertain batting line-ups with series on the line CSA dismisses former acting CEO Kugandrie Govender »
back to top