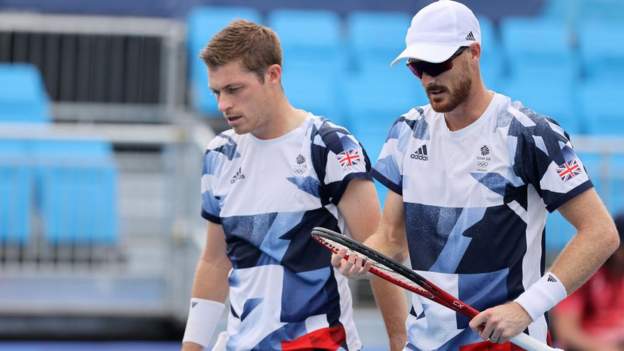 Great Britain's Jamie Murray and Neal Skupski were knocked out of the men's doubles tennis event at Tokyo 2020 in the second round.

They lost 6-3 6-4 to Kei Nishikori and Ben McLachlan from Japan.

Neither Murray nor Skupski are competing in the mixed doubles or singles.

Scot Murray was called up to partner Skupski at the Games following the withdrawal of British number one Dan Evans.

Seven-time Grand Slam doubles champion Murray, 35, has failed to progress beyond the second round in four Olympics.

Brother Andy pulled out of the men's singles on Sunday with a minor thigh strain but is competing in the doubles alongside Joe Salisbury.

They face Germans Kevin Krawietz and Tim Puetz in the second round on Tuesday.