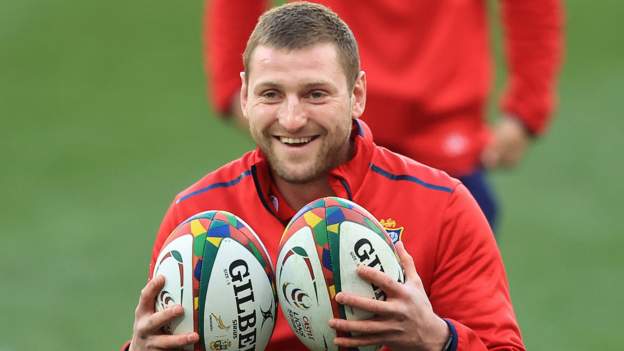 Fly-half Finn Russell will return to British and Irish Lions training on Monday, but prop Wyn Jones is doubtful for the second Test in South Africa.

Russell has not played since damaging his Achilles during the 54-7 win over the Sharks on 7 July.

"He could potentially be in the mix, [we have] to see how he pulls up," said defence coach Steve Tandy

The Lions will hold a selection meeting on Monday and announce the team for Saturday's Test on Tuesday.

"I know Finn's been reacting well to the training he has been doing so we'll discuss all that this evening," added Tandy.

Biggar started and kicked 14 points before being forced off the field with a head injury, while England captain Farrell kicked a late penalty after coming on as a replacement.

"Biggs is just going through the return-to-play protocols. He was good in the changing room and he's started those now," added Tandy.

"Dan, all being well, should be available to train on Thursday."

Tandy said Wales prop Jones was "doubtful" for the second Test after missing the first Test with a shoulder injury, but the Lions will not call up a replacement at this stage.

The Scarlets loosehead was named in the starting line-up on Saturday before being forced to withdraw, with Scotland prop Rory Sutherland starting and Mako Vunipola coming on to the replacements' bench.