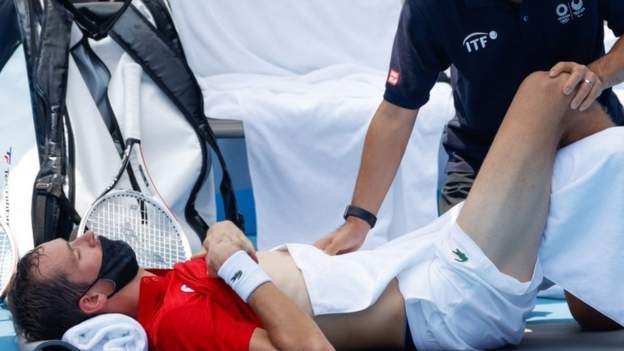 Daniil Medvedev struggled to breathe in the Tokyo heat on Wednesday, asking the umpire who would be responsible if he died during his Olympic tennis match.

While he was able to finish his match, that was not the case for Spain's Paula Badosa, who left hers in a wheelchair.

Heat and humidity have been a big talking point among tennis players at the Games, with Medvedev among those to question the scheduling last week.

"I can finish the match but I can die," Russian Medvedev told the umpire.

The 25-year-old world number two took a medical timeout on court and also had the trainer on during a 6-2 3-6 6-2 win over Italy's Fabio Fognini that put him into the quarter-finals.

Chair umpire Carlos Ramos asked Medvedev if he was all right, with the second seed replying: "I'm fine. If I die, will the ITF [governing body the International Tennis Federation] take responsibility?"

Medvedev and world number one Novak Djokovic suggested last week that organisers should push back the start times of tennis matches to avoid the hottest parts of the day.

The ITF said at the time that "player health is paramount" and pointed to its extreme heat policy, which allows players a 10-minute break between the second and third sets if both agree to it.

Medvedev used that time on Wednesday to take a very cold shower.

"Even from the first set I didn't feel good enough with my breathing. That's why I called the physio - I felt like my diaphragm was blocked," he said, adding that he felt it was the most humid day so far in Tokyo.

"And then on the second set, I just had darkness in my eyes, like between every point. I didn't know what to do to feel better. Like I was bending over and I couldn't get my breath together so I was ready to just fall down on the court."

Meanwhile, Badosa said she had suffered heatstroke, which had forced her to retire from her match against Czech Marketa Vondrousova.

"It's a shame to end my participation in this way. It's been a tough ask since day one. We tried to adapt as best we could but today my body hasn't held up as it needed to," she said.