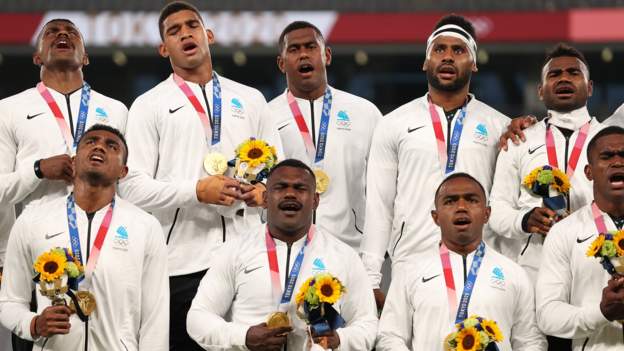 When Gareth Baber was appointed as Fiji Sevens coach in January 2017, he was given one ultimate goal.

Retain the Olympics title the nation won in Rio 2016 under Ben Ryan which was Fiji's first ever gold medal.

Baber accomplished his mission when the class of 2021 defeated New Zealand in Tokyo.

Success was commemorated by emotional scenes as the squad came together in a huddle in prayer, players down on a knee along with coach Baber and his assistants before singing reverberated around the stadium.

Just a few hours later and sitting back in his quiet room at the athletes village, Baber reflected on a unique Olympics and remarkable five-year personal journey he has never experienced before.

"I feel quite numb and have not quite gathered what we have achieved," said Baber.

"It feels slightly surreal, perhaps even more so because of the lack of crowds and there is not going much on in the village but the celebrations we generally had have been around faith.

"This [Olympics] has been been the vision for a long time. I have lived with that sort of pressure and being reminded of that several times each day as we have progressed through the last four and a half years.

"There are insecurities in Fiji and there's been times when I would think I wouldn't be walking back into work on Monday morning after a loss.

"I wouldn't have gone to Fiji if I didn't want a challenge and some people said I was mad doing it in the first place. As I sit here, it sort of vindicates why I went. They have looked after me and I have loved my time here."

Tears were shed by the players as they again did Fiji proud.

"I am glad for the nation and they have the elation at being able to rejoice again five years later," added Baber.

"This is a small country able to punch above their weight in relation to resources and finances of other nations. The Fijian people are proud of what we have been able to achieve away from home on a world stage.

"The strongest motivational factor was to do the nation proud and give their families and loved ones a lift. It was just about playing like they've done for years in the villages and on the beaches.

"Rugby is so intrinsically linked with national identity, a bit like in Wales. That is prevalent in Fiji and linked to how they feel about themselves and how they believe they are perceived across the world.

"They see themselves as people who can fight above their weight and they do that in rugby generally, particularly in Sevens.

"That is the crux of the sport in Fiji because it is so easily accessible with tournaments virtually every other weekend at the heart of the communities."

Those villages will again be celebrating Olympic success but there will be contrasting scenes to those of 2016 when the all-conquering heroes were greeted back.

On this occasion, two weeks in quarantine await the players because the country is in the grip of a Covid-19 surge of cases.

"There is some rubbish going on there at the moment with Covid which other nations have had," added Baber.

"This victory gives the country a lift for a short period of time when they can rejoice but it will be different.

"I have seen some footages on the phones that whatever curfew was in, it looks like lightly broken down at this point in time but we are aware of what's going on.

"Our captain Jerry Tuwai mentioned in our press conference a gold medal doesn't make up for the loss of someone's life.

"We're mindful about the way we behave and how the players are welcomed back into Fiji is hugely important.

"We need to get that right for the safety and security of those people back there. It is tough, but we will get time to celebrate at some point."

These celebrations might not have happened at all, though.

Baber's players gathered together in early April at a Christian hostel in Suva just as the Covid-19 crisis escalated. They had expected to stay together for a one-week training camp but have not seen their families since.

Instead they have been isolating together as the Games approached and travelled to Australia. With passenger flights to and from the islands grounded, they arrived in Tokyo aboard a cargo plane carrying frozen fish.

"The situation rapidly deteriorated and on Easter Monday [5 April] when they came into training, they didn't go home following that as they had expected," recalled Baber.

"It's OK if you have the space and time to make those adjustments and plan around people being away from family, but they didn't.

"That was the last time they saw their families and there was a lot of unknowns.

"I can remember a situation where I was with Jerry and the players, it got to a point where we are in containment zones. They were ready to break out, go home. They had had enough, they were gone.

"It was one of those moments as a head coach you say: If you go, that's it - we're done. We can't go to the Olympics.

"There were about two or three days things were on a knife edge. It was real for us, very quickly. We made it to Australia but did not know how we were going to get to Japan.

"Trying to piece that together has been a logistical nightmare. You have to get those things right and that was nagging at us all the way, as we could have our preparations derailed in less than 24 hours."

Baber admitted the players rallied after the initial concerns.

"I have to pay special tribute to them because by the time these guys have flown home and done their quarantine, they won't have seen their families for 20 weeks," said Baber.

"It takes a special kind of person to make that commitment. For a few of the boys that tournament was the first international rugby they'd ever played, the first time they've ever been out of Fiji and on a plane.

"You won't find a tighter group of people than this team. If you give them a vision of where you want them to go, they will run through brick walls for you.

"They players coped with it well and there has been good lessons we've learned in relation to resilience and building of our culture. They have been a credit to their country and their families."

Baber himself will not be travelling back to Fiji. Instead he returns to Wales to see his family for the first time since 3 January.

"When you take a job in Fiji, there's going to be travel involved," said Baber.

"Anybody who spends time away from their families know it is tough but I love coaching and being in Fiji has been an immense learning experience.

"My family have supported me massively. You feel selfish at times because you're driving your ambitions but equally you know you're supporting the family.

"That's hugely important to me as a father and husband because I don't want them to want for anything.

"My wife is the rock of the family and I would not be able to do this without them and the kids have been excellent.

"I'm hugely looking forward to seeing them. It's just suddenly hit me I will be back with them at long last."

So is this it for Baber with Fiji after achieving the holy grail?

"I have an extension on my contract until the end of December. I've loved my time in Fiji, it's been massively challenging and I want to do the right thing by everybody.

"I need to make sure my next challenge is something going to stimulate me and utilise what I've done so far.

"If that needs to be with the Fiji, I will throw myself into it again like we've done this time. If it's something else, we will see."