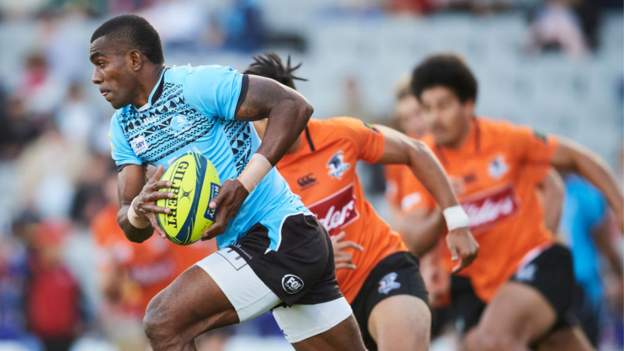 Fijian Drua and Moana Pasifika will join Australian and New Zealand Super Rugby sides in a new 12-team competition from 2022.

It builds on the 'Super Rugby Trans-Tasman' held earlier this year between Australian and New Zealand sides.

Rugby Australia chief executive Andy Marinos said it was a " game-changer for rugby in the Pacific, and indeed the rest of the rugby world".

The old Super Rugby competition, which featured teams from Australia and New Zealand as well as South Africa and Argentina, looks unlikely to continue following its suspension last year due to the Covid-19 pandemic.

Australia and New Zealand held their own domestic tournaments in 2020, before this year's trans-Tasman competition.

'Super Rugby Pacific' will have a three-week play-off schedule in May and June and will finish before the July international window.

Moana Pasifika, which is made up of players who identify with Pacific Island nations and is based in south Auckland, played their first game in December 2020.

Fijian Drua were established in 2017 and won the Australian National Rugby Championship title in 2018.

"We've seen the brilliant rugby that Fiji play in all formats of the game and their inclusion will make this new competition one of the toughest in the world," added Marinos.

"Moana Pasifika and the Fijian Drua will add an enormous amount of energy, skill and talent to the competition, not to mention a passionate support base," said New Zealand's general manager of professional rugby Chris Lendrum.

"The Pasifika nations have added so much to world rugby over the years and this is an opportunity to enhance the standing of Pasifika rugby."

More in this category: « Quins miss out on play-offs after Lang's late penalty falls short Ulster 35-29 Glasgow Warriors: Hosts hold on to win league opener in nine-try thriller »
back to top