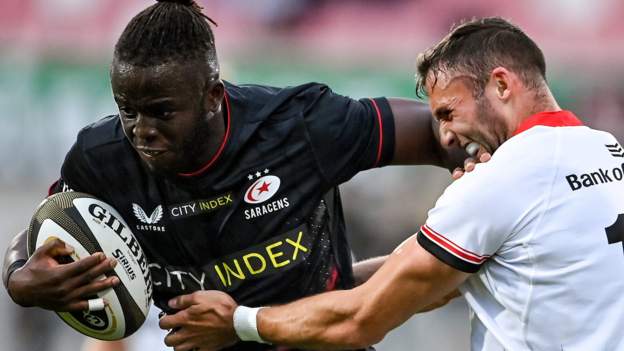 Matty Rea touched down to give Ulster an early lead but Saracens stormed back with four tries in 12 minutes to go in 26-7 ahead at the break.

Saracens lost Ivan van Zyl to a red card and Ulster capitalised with two tries to close within five points.

Back came Saracens and Harris' eight-minute hat-trick sealed victory for the English visitors.

The two sides, playing their first games of the new season, provided entertaining fare in front of 10,000 spectators in Belfast.

Rea rumbled over after three minutes and Ian Madigan added the extras as Ulster made the perfect start.

But they would go on to concede four tries in the next 16 minutes as Saracens produced a spell of scintillating rugby.

Alex Goode set up the first two tries, sending Elliott Obatoyinbo through for their opener before Nick Tompkins dotted down.

Tom Woolsencroft was next to go over after a lineo-ut maul and it was followed by Rotimi Segun sprinting in for the fourth try.

Goode fired over three conversions but Ulster halted the Saracens charge and the remainder of the first half was a largely scrappy affair.

Ulster came out strong on the restart but they only added to their tally after replacement scrum-half Van Zyl was dismissed on 52 minutes for a dangerous tackle on Craig Gilroy as he jumped to collect the high ball.

The hosts piled on the pressure and they were rewarded with Andrew Warwick and Bradley Roberts powering over from close range - Madigan converted both tries.

Ulster were within a score of levelling the game but Saracens moved up a gear to dash hopes of a comeback.

Charlie Watson's pass set Harris on his way to dart in and the replacement then scored from a superb Manu Vunipola cross-field kick before completing his quickfire treble by intercepting a pass and running clear to the line.

Vunipola split the posts twice from his three conversion attempts as Saracens strolled to the win.

The teams will meet again next week in a return fixture.

Ulster coach Dan McFarland: 'I'm really pleased to get that under our belt against really good opposition. We put some nice work out there, we obviously struggled at little bits, but some young fellas got some experience and they'll have really enjoyed that and I enjoyed watching them.

"In the first half we struggled physically. When Saracens had all their top players on the pitch it was difficult for us and we have to learn ways to win the collision when we're physically outmatched.

"I also learnt that there's a lot of grit in our players and after that first quarter, that second and third quarter we played really well and got right back into the game at 26-21.

"There was a lot of fight in us there and unfortunately at the start of that fourth quarter we had three errors in a row that ended in a couple of tries and then obviously we're chasing it and it was the end of the game."

More in this category: « Quins miss out on play-offs after Lang's late penalty falls short Ulster 35-29 Glasgow Warriors: Hosts hold on to win league opener in nine-try thriller »
back to top