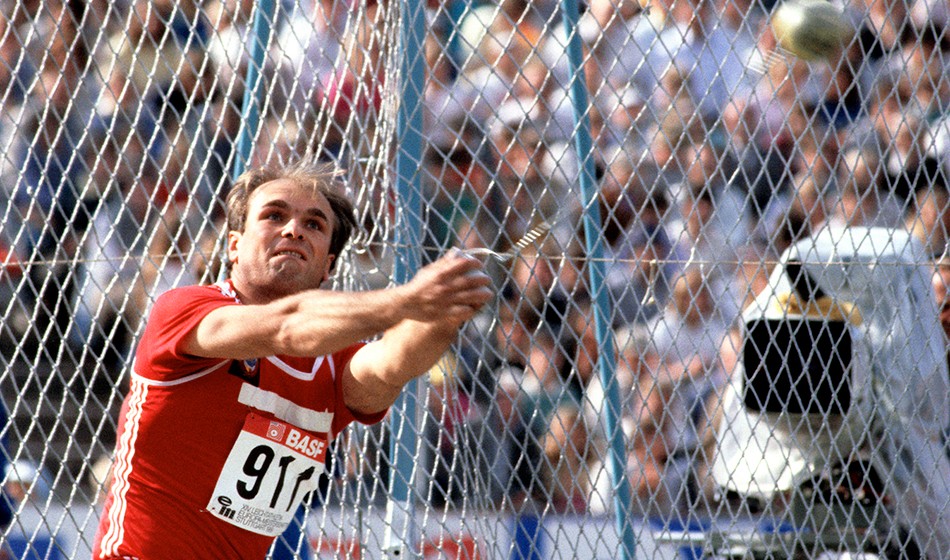 Widely regarded as the greatest hammer thrower in history, Yuriy Sedykh has died aged 66 in France. Representing the Soviet Union, he won Olympic titles in 1976 and 1980, plus a world crown in 1991, whereas his world record of 86.74m from Stuttgart in 1986 has stood the test of time and remained unchallenged for 35 years.

In total Sedykh set six world records starting with 80.38m in 1980. His third world record of 81.80m came at the Olympic Games on home soil in Moscow. He briefly lost the world mark to fellow Russian Sergey Litvinov in 1982-83 but he responded by improving the record to 86.34m in Cork in 1984, 86.66m in Tallinn in 1986 and then to his still-standing mark of 86.74m during a titanic battle with Litvinov at the European Championships.

On hearing that Litvinov had thrown over 87 metres in training, Sedykh unleashed a tremendous series of throws with his six efforts averaging 85.78m. “I could not,” he said, “afford to have a bad day.”

That 1986 victory was one of three European titles he won as he also captured gold in Prague in 1978 and Athens in 1982.

In the Olympics, after successfully defending his crown in Moscow in 1980 he was due to go for a hat-trick of wins in Los Angeles in 1984 but was denied by the Eastern Bloc boycott of the Games.

Instead he returned to win silver behind Litvinov at the 1988 Seoul Games and then wrapped up his career with a world title in Tokyo in 1991, although he was still throwing over 80 metres in 1994.

At 6ft 1in tall he was not the biggest or strongest thrower but he came closer than anyone to perfecting what he called “the dance” and his technique has been studied by hammer throwers ever since. “I understand my body,” he once said. “I give orders to my body and make everything coordinate.”

Today, Sedykh and Litvinov are the only throwers to break the 85-metre barrier let alone the 86m mark. The No.3 thrower in history, Vadim Devyatovskiy, has a best of 84.90m whereas the current Olympic champion, Wojciech Nowicki of Poland, threw a PB of 82.52m to win gold in Tokyo.

Devyatovskiy served an anti-doping suspension during his career. As did fellow Belarusian Ivan Tsikhan, who came within one centimetre of Sedykh’s world record in 2005 but saw the mark later expunged from the rankings after a drugs positive.

Sedykh of course came from a period when drug-taking was particularly notorious although he always denied taking banned substances.

Born in Novocherkassk on June 11, 1955, Sedykh grew up in the Ukrainian town of Nikopol and later moved to Paris where he became a PE teacher, while in addition travelling the world to inspire young throwers and their coaches in a series of hammer clinics.

He married Soviet world shot put record-holder Natalya Lisovskaya and had two daughters who followed in his footsteps. His eldest daughter Oksana Kondratyeva competed for Russia internationally while his younger daughter Alexia Sedykh won the inaugural Youth Olympics title for France in 2010.

More in this category: « Brigid Kosgei powers to women’s win in London World 2000m record falls to Francine Niyonsaba »
back to top