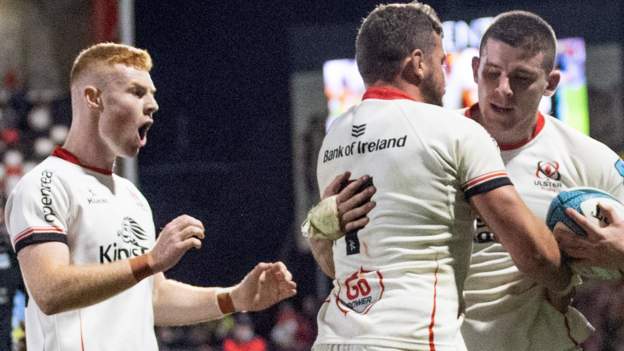 Ulster held off a stubborn Glasgow Warriors in a nine-try thriller to edge their way to a maiden United Rugby Championship win in Belfast.

After a close first half the hosts scored quickfire tries through Marty Moore and Nick Timoney to open up a 13-point lead.

But Glasgow did not yield and reduced the arrears to six points.

The final 10 minutes were played exclusively in Ulster's 22 but the hosts stood firm to close out the win.

The visitors will take two losing bonus-points home after an impressive display as their new-look side, that included four starting debutants, did not buckle despite coming up against a partisan crowd for the first time since early 2020.

Ulster showed enough in attack to get the job done, and in their early second-half purple patch began to showcase some their ball-in-hand skills, but a lack of accuracy at the set-piece will provide the most obvious work-on as they take their win into their meeting with Zebre next week.

With 15,000 spectators in the stands, Friday's game was the largest crowd at a rugby game in Ireland since March 2020.

Buoyed by an atmosphere a millions miles away from the echoing emptiness of the stadium last season, Ulster kicked into top gear immediately as Stuart McCloskey broke a tackle to feed Robert Baloucoune who nearly ran in from halfway but was stopped just short of the line.

The early momentum yielded a try shortly after when Cole Forbes was judged to have deliberately knocked on as Ulster created numbers out wide, with the Glasgow full-back also being shown a yellow card for his troubles.

Ulster's team was largely settled while Glasgow arrived in Belfast a new-look side, featuring four debutants in their starting XV.

A disjointed start was jolted into life through one of those debutants, centre Sione Tuipuloto who thundered through Baloucoune's attempted challenge to send George Horne in at the corner.

Amid an experienced side, hooker Bradley Roberts was making his first competitive start for the hosts and he struggled to get to grips with the line-out as Ulster coughed up possession four times in the set-piece in the opening 40 minutes.

However Roberts did enjoy a moment to savour, crashing home from Ulster's ever-reliable maul to re-establish his side's lead.

It was not a lead the hosts were able to preserve until half-time with more unforced errors allowing Glasgow to set up field position and edging gradually closer to the line before Johnny Matthews eventually crashed over.

The introduction of Eric O'Sullivan and Rob Herring after the break had the desired effect as Ulster carried with more purpose, allowing Moore to drive over and put his side ahead within four minutes of the restart.

The score saw Ulster settle into a rhythm with Billy Burns given licence to release the dangerous backline, chipping forward for Jacob Stockdale to gather and feed Timoney to score as the province threatened to run away with it.

However Glasgow were in no mood to be blown away, and were back in business with a penalty try of their own after James Hume was judged to have illegally prevented a Rufus McLean try in the corner, with the Ulster midfielder sent to the sin-bin.

Despite extending their lead with the numerical disadvantage, courtesy of replacement scrum-half Nathan Doak's try that followed Will Addison's charge down, Ulster conceded again with Jamie Dobie cutting inside to move the scores to 35-29 going into the final 10 minutes.

Glasgow pressed, and Ulster hurt themselves with more set-piece woes including coughing up a penalty inside their own 22 on their own scrum, but some crucial turnovers allowed them to see out a breathless win.