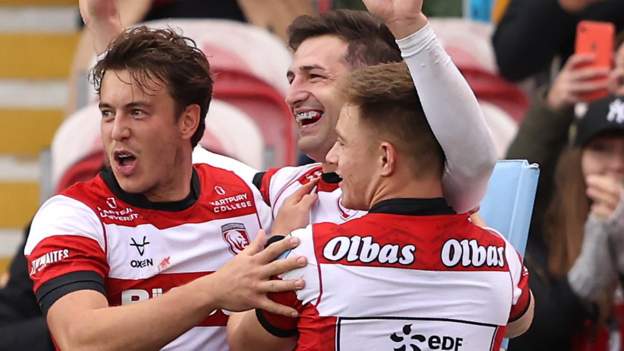 Evans' third penalty gave Gloucester a 16-point lead before Ben Stevenson got the Falcons on the scoreboard after 50 minutes and Joel Hodgson's penalty brought them within three points.

The win lifts the Cherry and Whites up to fourth place in the Premiership as they extended their unbeaten run to four matches after losing their opening two games of the season.

Falcons - who beat Bristol last week - lost for the second time in five games and are now seventh.

A tight first half went Gloucester's way when Rapava-Ruskin capped off a driving maul from the Cherry and Whites after a close-range lineout with the prop popping out from the side to go over in the right corner.

But the Falcons responded well after the break as Stevenson went over under the posts following a review from the television match official, who adjudged that Hodgson's pass had not gone forward in the build-up.

Evans landed two more penalties to give the hosts some breathing space before May scored in the left corner after Stephen Varney went to the blind side off a maul.

Nordli-Kelemeti went in from close range with the final play of the game for a consolation score for Newcastle, but it was not enough to earn them a losing bonus point.

"Lloyd [Evans] was outstanding. He was a late change and it's been frustrating for him to sit out the last few games.

"It was an ugly game but they are a pressure team that make it hard and niggly.

"There will be loads to look at but I'm pleased that when we got into the 22, we came away with points although we left a couple of scores out there.

"When they got it back to 16-13 there was a danger of all our hard work being undone but we pulled through."

"They are a far better side than last year but we had 54% of possession and 62% of territory so we should have won the game.

"It's very disappointing as we couldn't get on the front foot and the penalty count was 9-1 against us in the first half.

"For the second time this season, we have come a cropper with the referee but that's our fault.

"We missed a good opportunity to win as we needed to be a bit smarter but we kept screwing up by giving away soft penalties."