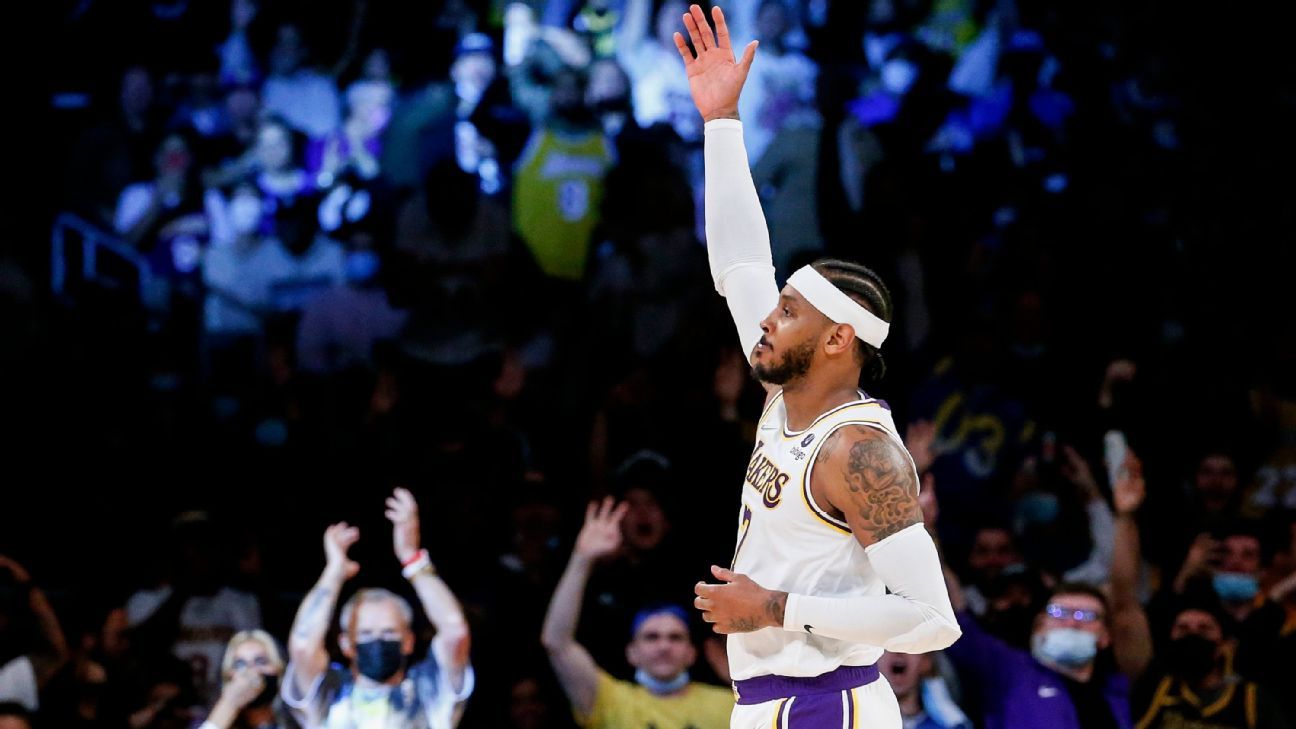 LOS ANGELES -- Carmelo Anthony said the best part about passing Moses Malone for No. 9 on the all-time scoring list in the Los Angeles Lakers' 121-118 win over the Memphis Grizzlies on Sunday is the level he's been able to sustain nearly two decades into his NBA career.

"I'm still here doing it," Anthony said after scoring 18 of his team-high 28 points in the second half to seal the victory. "I think that's what I'm honestly excited about. I'm here in year 19 still doing what I'm able to do. Still passionate about the game. Still passionate about coming to work every day and getting better. And what a better night to reach ninth than with a win, the way that we needed a win tonight."

Anthony came into the night needing 15 points to leapfrog Malone's 27,409 career total. He got going early, scoring five points in the first quarter, followed by another five in the second, before really finding a rhythm in the third.

He hit back-to-back 3s in a 48-second span, turning a two-point deficit into a two-point lead after the flurry, with his wing triple with 3:20 remaining in the quarter lifting him past the 13-time All-Star and 2001 Hall of Fame inductee Malone.

"He didn't crawl up to that milestone," said Lakers coach Frank Vogel. "He blew the doors off of it."

Anthony continued to pour it on in the fourth, scoring 12 more in the final period. He iced the game by making two free throws with 1.9 seconds remaining to secure L.A.'s first win of its new campaign after an 0-6 preseason followed by an 0-2 start to the regular season.

LeBron James' relationship with Anthony dates back to when he was 16 years old and Anthony was 17 when they met for the first time. "I came back and told my guys I just seen the best player I ever seen to that point," James recalled Sunday.

The two have remained close, and after countless games together for the U.S. Olympic Team and making the same All-Star rosters, they are playing on the same NBA team for the first time this season.

"Usually when some of my friends have these kind of achievements I text them or call them or FaceTime or put something on social media," James said afterward. "In this case I got to do it in person, because he's my teammate now, so it made it special for me."

Anthony said the Lakers presented him with the game ball in the postgame locker room as a keepsake.

"They wanted me to give a speech, but I was too tired," Anthony said, flashing his signature smile.

Malone finished his playing career as a 39-year-old, averaging 2.9 points for the San Antonio Spurs in his 21st season. It was his third straight year averaging fewer than five points per game to finish out a Hall of Fame career that included back-to-back league MVPs for Houston and Philadelphia in the early 1980s.

Anthony is 37 and is averaging 17.7 points through his first three games with L.A.

This after spending more than a year out of the NBA -- from early November 2018 until late November 2019 -- after the Houston Rockets waived him after he played just 10 games with the franchise.

"A couple of years ago, nobody wanted him," said Anthony Davis. "He was counted out. Doubted. And he stayed the course. Stayed a professional and got a shot in Portland. Made a name for himself again. And he's here now and doing the same thing, picking up where he left off. It's an honor to have him on our team, an honor to play beside him."

James, who along with Anthony make up the first pair of 19-year veterans to ever play together in league history, also was sure to bring up how the league recently turned a cold shoulder toward Anthony.

"He's been doing it for quite a while and it's just beautiful to continue to see, especially when you know, they gave up on him," James said.

Anthony, who is on a one-year contract with the Lakers and will turn 38 in May, sounded like somebody intent to keep getting buckets as long as a team will have him.

"Scoring the basketball is not easy. We may make it look easy, but it's not easy," Anthony said. "For me, this is 19 years of repetition. And night-in and night-out. Day-in and day-out. Every summer. Every season. I'm reaping those benefits right now because of the persistence that I have in my professionalism. What I bring to the game, how I approach the game. And I want to keep going. That's all that matters to me."