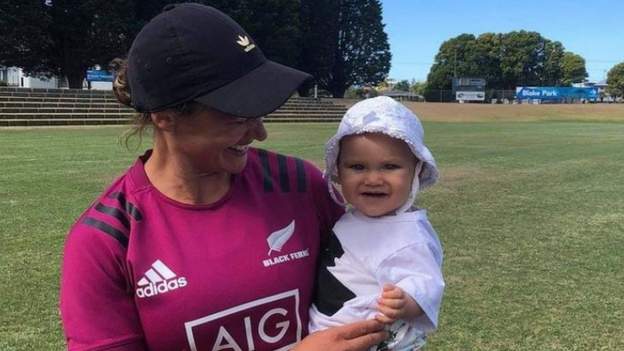 Three years ago, New Zealand captain Les Elder woke up every morning with one goal in mind: to win a World Cup on home soil.

The Black Ferns flanker is still just as firmly fixed on that aim, but that is not the first thing she thinks about each day now.

First, she thinks about her 17-month-old daughter Mihiterena.

Elder is in England to play the Red Roses in two Tests as both sides prepare for the World Cup in 2022.

The 34-year-old says winning the tournament when New Zealand host it for the first time "is definitely a dream" and adds that the birth of her daughter has only given her more profound motivation.

"Before I had my daughter I was pretty sure what my 'why' was and what got me up in the morning," she tells BBC Sport.

"But now that 'why' is gone and a new one sits in front of me and gets me up every morning. It's a why that is probably deeper than anything I've ever had.

Returning to rugby three months after having Mihiterena, Elder has been supported by one of the best maternity policies for rugby players in the world.

New Zealand are playing in a coronavirus bubble but on previous trips, players with a child aged under one have been given £8,000 to support costs for a carer to travel with them and their baby.

This time, parents are away from their children for two-and-a-half months because the Black Ferns will travel to France after fixtures against England on 31 October and 7 November.

There are so many parents among the New Zealand staff and players that they have set up a support group.

"We have a shared group of carrying that hurt."

Elder adds that she has to make sure "every day counts" while she is away from her daughter.

"While there are some moments when I'm really missing my girl, the thing that I pin to that keeps me moving forward is that she's OK," she continues.

"She's back at home and is absolutely fine. My husband does an amazing job and we have a village that supports us.

"One day she's going to look back and see what her mum was able to achieve and if that can help her as a young woman striving to be whoever she wants to be, then I'm proud of that, that's what keeps me through."

Quick return may not have been 'best decision'

There is still more to be done for mothers in sport and Elder wants more research around the impact of different stages of pregnancy.

She says she "had amazing support" but "it was all very much just guided by how I was feeling".

"To have some hard facts and knowledge behind that would probably help not just me but the specialists who are there to programme for me, like the S and Cs [strength and conditioning coaches] and physios," she explains.

Elder gave birth by C-section and is still not sure whether her swift return to rugby was "the best decision to make physically".

She has noticed a difference in her core and lower back and has "had to pay a lot of attention to those areas".

"I'll never know if my quick return to rugby has impacted some of the stuff I still have to manage now," she says.

"I would hate for women to see that and think 'oh she returned to FPC-level [New Zealand's top women's league] rugby three months after having her kid, I can do that too'."

In contrast to the New Zealand group, back-row forward Marlie Packer is the only mother among England's contracted players.

Contracted players are eligible for the Rugby Football Union's pre-maternity policy introduced in September 2020 but the governing body says it recognises the need to "formalise" a plan for post-birth.

The RFU offers reduced activity and play with medical advice as well as options to take maternity leave or transfer to a different role, but currently has nothing in place to support mothers taking their children on tour.

Packer, whose partner Natasha give birth to their son in September 2020, says being in camp with England and away from Oliver is "really difficult".

"I got a bit emotional leaving him on the first week," she adds.

"I don't really know what came over me. The next stint is going to be 27 days away from him. He's just on the edge of walking so I'm gutted that I will probably miss that.

"It is hard but this is what I love doing and hopefully one day he'll be able to look back and be like 'that's my mum'. I hope to make him proud."