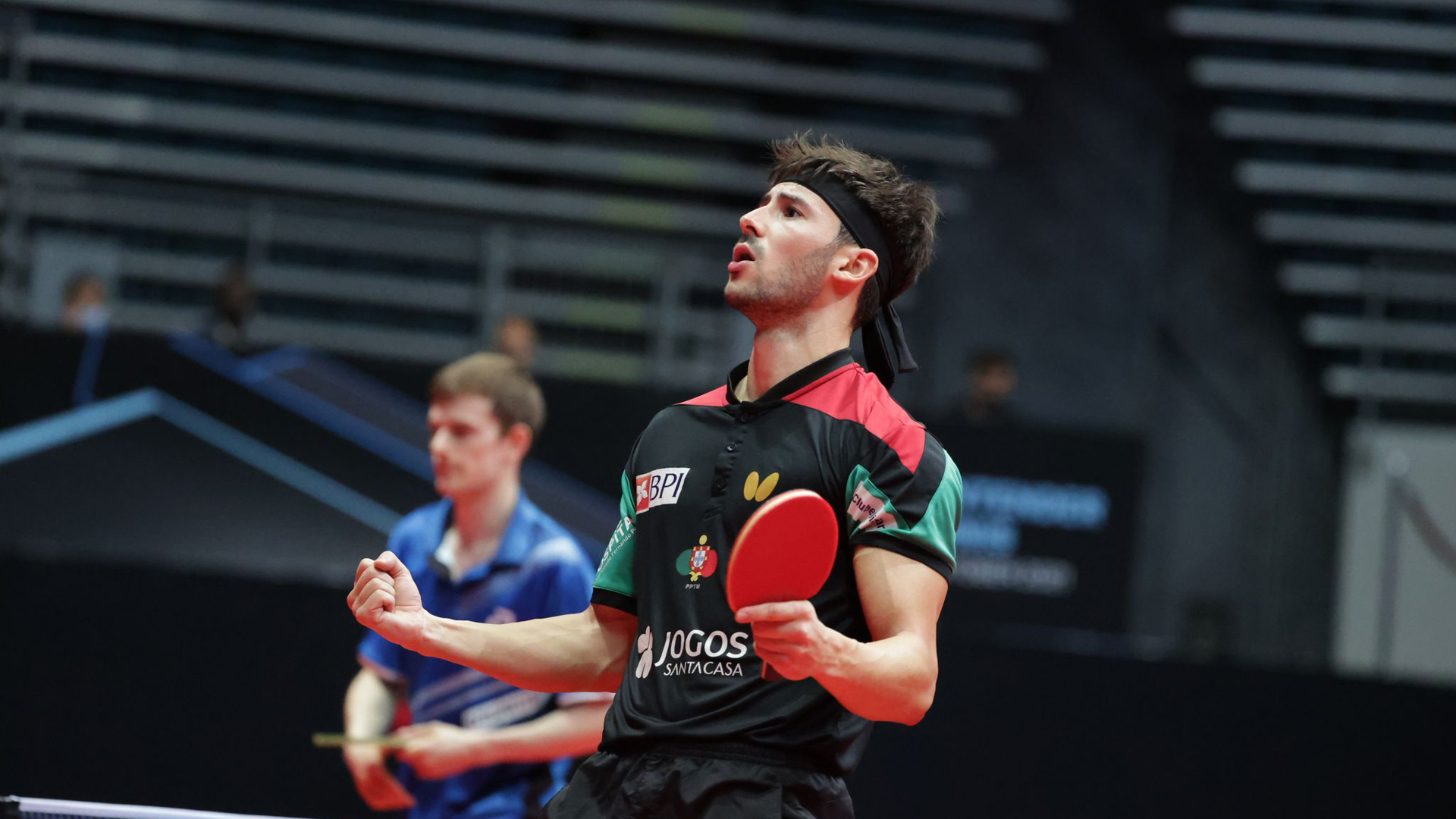 Both players showed class and put in a lot into the tie. It was a match that lived up to expectations, with Geraldo eventually prevailing with an 11-8, 9-11, 11-6, 8-11, 12-10 win over Ort, the WTT Contender Budapest runner up. Twice Ort came from behind to level up the match, only for the Portuguese to carry the day at long last.

A relieved Geraldo admitted after his victory that it was a tough match for him: “It was a service and receive match because both of us tried to win our points through our service. He is a very clever player, and I managed to overcome his intelligence on the table. The fifth game was very tough, but I had to give everything to win at 12-10.”

Romania’s Adina Diaconu stuck to her game plan to beat African Champion Mariam Alhodaby in the second stage of the qualifying round of the Women’s Singles.  Touted as one of the star matches of Day Two, the encounter saw the former European junior gold medallist impose herself over the Egyptian when it mattered most. Alhodaby was leading in the first game, but Diaconu caught up with her to win the first game at 11-9. The European star again dominated the second game at 11-5, but Alhodaby fought back to win the third game by an 11-9 margin. To prevent her opponent’s comeback, Diaconu put the match beyond Alhodaby in the fourth game with an emphatic 11-5 win, thereby progressing to the final round of the qualifying stage.

“It was nice playing another WTT event because nowadays there are few competitions to play. I felt very good playing my first match in Tunis, and I enjoyed every moment of it. I tried to go into the competition with full focus on the table. I knew that my opponent was the African champion, and I tried to watch some of her matches before we met. I really played tactically well against her. I tried to impose my rhythm on the match. I will be playing a familiar opponent in Serbia’s Sabina Surjan in the final qualifying match, and I hope I can win to make it to the main draw,” Diaconu said.

In the day’s other clash, Italy’s Giorgia Piccolin enjoyed an easier passage to the next stage after an imposing 11-3, 11-7, 11-7 win over Austria’s Sofia Lu Chen.

“I am meeting Sweden’s Filippa Bergand in the final qualifying match for a place in the main draw. I think I deserve to be in the main draw, and I will surely give my best against her because the first match has prepared me for it,” Piccolin said.

In African affairs, Egypt’s Marwa Alhodaby prevailed over Algeria’s Lynda Loghraibi with a 13-11, 11-8, 11-5 win. “I think playing against a familiar African opponent in the second stage of the qualifying round was an opportunity to prepare me well for the final match of the qualifying round. Fortunately, I will be playing against a familiar Indian player whom I narrowly lost to in our last meeting. I am really looking forward to playing in my first main draw of the WTT event, and it will be amazing if I can make it,” Alhodaby said.

Similarly, the Indian Selena Selvakumar continued her good run in the qualifying round with an 11-8, 11-6, 11-6 win over Austria’s Karoline Mischek. Compatriot Madhurika Patkar made a return to international competition after more than 19 months’ absence. She fought well against Czech Republic’s Katerina Tomanovska in one of the longest matches of Day Two to triumph with an 11-9, 11-13, 8-11, 11-5, 11-5 win.

“It was a very difficult match for me being my first WTT event and first international tournament after my last appearance in Oman in March 2020. I just wanted to enjoy myself, and I really enjoyed it. Even when I was down 2-1, I just told myself that I needed to enjoy myself and not put myself under any pressure. I kept the momentum until the fifth game, which I won. I am here to take one game at a time,” the 34-year-old Indian star said.

In the Men’s Singles, Germany’s Fanbo Meng beat Czech Republic’s Tomas Polansky 4-11, 11-6, 11-9, 11-7. “I’ve never played against him before, but I knew he was better ranked than me. Initially, I was not playing well in the first game, but in the second game, I got my concentration, and I started playing well while my tactics really worked well. I am hoping to play in the main draw, and I also want to get better with each match,” Meng said.

“I had problems when the match started because the ball was not touching my bat very well, and I was losing points. But when I decided to start playing the ball slowly, I think I reduced my opponent’s speed. I varied my serves and spin, and they really helped me in the match. I was also lucky to win some points through the nets because of the slowness of the ball,” a happy Thakkar said.

Day Three of the Qualifying Round will begin with the Men’s and Women’s Doubles matches.

In the Women’s Doubles, six pairs will compete for the three slots available in the main draw in the qualifying round. France’s duo of Camille Lutz and Oceane Guisnel will take on Monaco’s Xiaoxin Yang and Germany’s Franziska Schreiner. At the same time, Slovakia’s Nikoleta Puchovanova and Dasa Sinkarova will face France’s Marie Migot and Lucie Gauthier. Egypt’s Roa Amro and Alaa Yehia will tackle France’s Audrey Zarif and Leili Mostafavi. There is action in the Men’s Doubles as four pairs will battle for two remaining slots in the main draw.

The afternoon session will witness another round of matches to determine players that will compete in the main draw of the Singles event. The Women’s Singles will witness a repeat of rivalry at a junior level between Egypt’s Marwa Alhodaby and Indian Selena Selvakumar, while Italy’s Giorgia Piccolin will be up against Sweden’s Filippa Bergand. Romania’s Adina Diaconu will face a familiar opponent in Serbia’s Sabina Surjan, while WTT debutant Indian Madhurika Patkar will face Sweden’s, Christina Kallberg.