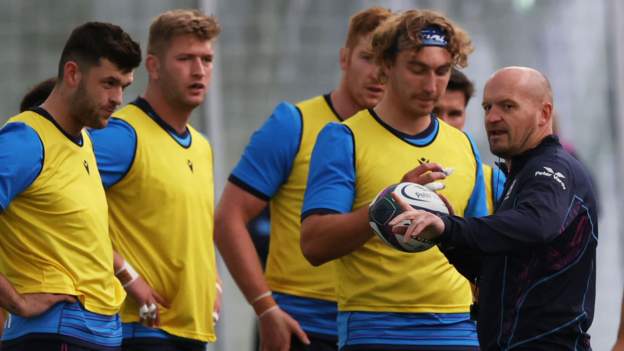 Glasgow Warriors pair Rufus McLean and Sione Tuipulotu will be at wing and centre, while Edinburgh's Jamie Hodgson will play in the second row with club-mate Pierre Schoeman at loose-head.

Another four are in line to make their debuts from the bench.

Blair Kinghorn will play at 10 in a new half-back combination with Ali Price, who is co-captain with Jamie Ritchie.

Players based in England and France are unavailable to head coach Gregor Townsend since the Test falls outside the official international window.

With Finn Russell, Adam Hastings and captain Stuart Hogg among those unavailable, Kinghorn makes his international bow at fly-half on his 26th appearance.

"He's a very good passer, he's got that running ability too," said Townsend. "He's really engaged with playing there. It's something that excites him.

"He was very good for us on the wing two Six Nations ago and just picked up a couple of injuries which means he's not been involved as much. There's a lot of competition in the back three and we do see Blair as one of our leading players in those positions."

On the co-captaincy experiment in the absence of Hogg, Townsend said: "Leadership starts with playing well, followed up with influencing others.

"You do that by helping people out by making your point in meetings or huddles to say 'this is what we need to do better'.

"Ali was added to our leadership group in the Six Nations and he seems to thrive getting more responsibility. He led well on the Lions tour in the summer."

Scotland were comfortable winners in the last meeting with Tonga at Rugby Park in 2014, two years after the South Pacific islanders earned a shock 21-15 success at Pittodrie.

"Saturday will also be a huge occasion for a number of players in our squad who have the honour of playing for their country for the first time," added Townsend.

"Tonga will be very dangerous opponents for us, as they pose a ferocious physical challenge in attack and defence."

Who would you pick for Scotland's Autumn Test opener against Tonga? Pick and share your XV