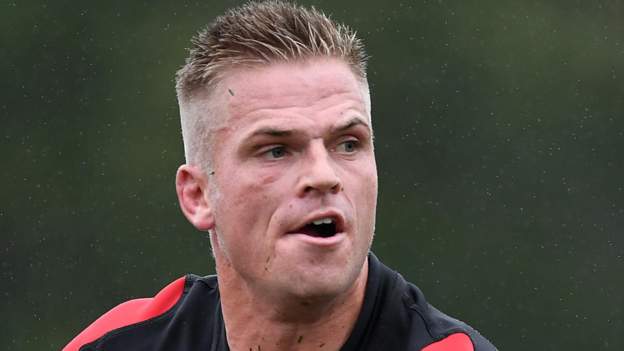 Anscombe is in line to start at 10 for Wales against New Zealand in his first international for more than two years.

The 30-year-old suffered an horrendous knee injury in August 2019 against England.

Anscombe only returned to action in September after 25 months on the sidelines.

Jones has seen the battles Anscombe has been through at Ospreys to return to the top level.

"The length of time and setbacks he's had along the way are a credit to him and what he's put in," said Jones.

"Irrelevant of if you're fit and playing every week, people only see the Saturdays.

"Gareth would probably say himself he's been through some dark periods when he was coming close to a return but having setbacks."

Anscombe played for New Zealand at Under-20 level before moving to Wales who he qualifies for through his Cardiff-born mother Tracy.

He has played 27 internationals but has only made one replacement appearance against the All Blacks in 2016.

Jones believes seeing Anscombe's inspirational return has lifted the squad as he prepares to face the country where he was brought up.

"When someone comes back from adversity or a long time out, and you can see their energy growing and the smile back on their face, that is really important to a squad," added Jones.

"You can feel like you're on an island when you're injured.

"To see the fight and bite he's got, holding people to account in training, is when you know someone has their foot back in the door and is ready to have a crack.

"He has been showing and displaying that for the Ospreys and since we have been back in camp.

"He's still got the fight and desire and if anything, it's probably more so than before because he's had that time away from the game. To see him back in the squad and what he gives to the environment is huge.

"Those characteristics which you see in a player who has been through so much is good and it can spawn a lot of determination from those around him."

Anscombe and Rhys Priestland are the number 10 options against New Zealand with English-based Dan Biggar and Callum Sheedy unavailable for the match because it falls outside World Rugby's international window.

"He wants to play but there is a balance," said Jones.

"My last outing for Wales was against France, that was one of the best games we've played in terms of the mantra we're trying to achieve.

"We came up short on the final result which was disappointing, but Rhys, Gareth and Biggs can all play in the style and have the control we need to approach games and play like Wayne wants us to play.

"Huge credit must go to Gareth and Rhys. They've been here in the jersey and had spells out for different reasons and gone the long way round.

"To see them back in the fold is great. It shows strength of character and to have players of that quality vying for that position can bode well for the squad and our performances."

Wales have more then 15 players missing for the New Zealand match because of injury, Covid-19 and English clubs not releasing their players.