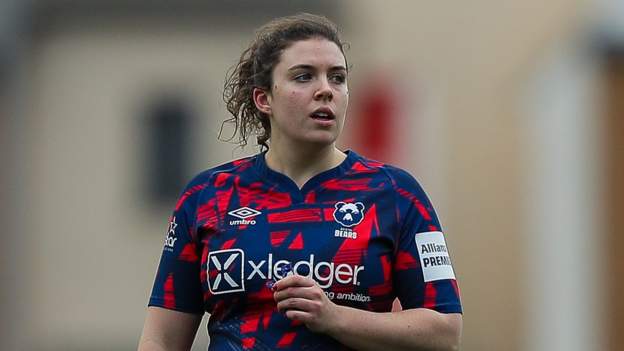 Bristol Bears centre Phoebe Murray believes the team have what it takes to "go all the way" in the Premier 15s after winning their first five matches this season.

Unbeaten Bristol sit top of the league table, ahead of Saracens thanks to their superior points difference.

Since the Premier 15s was created in 2017-18, Bristol have never finished higher than sixth.

They host Wasps on Saturday after a seven-week break from league action.

"We've always been striving to be a top-four team and actually now we do have that belief that we can do that and we could take it all the way," Murray told BBC Sport.

Bristol's successful start to the season marks a significant change from last year. Their five wins have already surpassed the four victories the team secured during the entirety of the 2020-21 season, which ended with them finishing eighth.

"To go five from five this season so far has been absolutely amazing. I think it's something we thought we were capable of achieving after the pre-season that we had," Murray said.

"But to actually go out there and show it, and I think probably prove a lot of people wrong off the back of last season when we didn't do as well as we hoped.

"Being eighth place, it was quite tough to bounce back and actually believe that we could and I think we only grew stronger after each match this season."

Despite being just 22, Murray is one of Bristol's longest-serving players having joined the team in 2017. With seven tries so far in five matches, she is also the team's top try scorer in the league this year and is playing what she calls her "best rugby".

"I think last season I kind of lost my way and lost my love for the game, it was a tough environment and we weren't succeeding," she said.

"In the summer I really had to focus on that self-belief and self-confidence and this season I'm a much more confident player. I back myself a bit more."

While the squad has remained largely unchanged this season, Murray attributes the instilling of a newfound confidence to the arrival of former Harlequins player Dave Ward as head coach.

"The standard of what we expect of ourselves has improved and I think that's driven by us as players and as coaching staff from Dave and Tom (Luke, assistant coach)," she added.

"The self-belief as well, that was something that we really had to change - believe that we can win, we can be a top-four team, we can compete with the bigger teams that did well last season."

The opening of Bristol's new High Performance Centre this spring has also led to significant changes. The team now spends three nights a week there training, using the gym facilities and eating meals together.

Murray equates it to around 10-15 hours a week, compared to the three to four weekly hours they previously spent together before matches. It offers the kind of bonding that can make the "1% difference".

The facility also enables more interaction with the men's team, and men's director of rugby, Pat Lam, is known to watch their sessions and matches.

"It's as professional as you can get without the women's game being professional," Murray said.

Like the majority of her team-mates, Murray juggles rugby with a career outside of the sport. She is in her fourth year studying medicine at Bristol University and insists that "really good time management" is the key to her success in playing alongside the demands of her course.

Medicine, however, is the long-term plan, with Murray keen to progress in her rugby career in the immediate future.

Having been made captain of the England Under-20s team in 2018, Murray's ultimate goal is to break into the England senior squad and play rugby full-time and professionally.

"That's the dream and it always has been since I was a kid," Murray said.

Under their previous name of Clifton Ladies, the team was first promoted to the Women's Premiership in 2003, then the top-ranked women's league.

Bristol finished at the top of the table for the first time in their history in 2016-17 - the last year before Premier 15s was introduced - but lost to Aylesbury Bulls (now Harlequins) in the final.

Saracens, Harlequins and Wasps have dominated the women's scene in recent times, finishing as the top three last season and winning eight titles between them in the past 15 years. But Murray believes there is no reason why Bristol cannot aim for a top-four finish or even a place in the final this year, in this form.

"We may as well say it that we could actually be in that final," Murray said.

"As long as we keep putting performances out and as long as we do keep striving to get better who knows what's possible."

More in this category: « Quins miss out on play-offs after Lang's late penalty falls short Katy Daley-Mclean to finish playing career with Barbarians appearance »
back to top