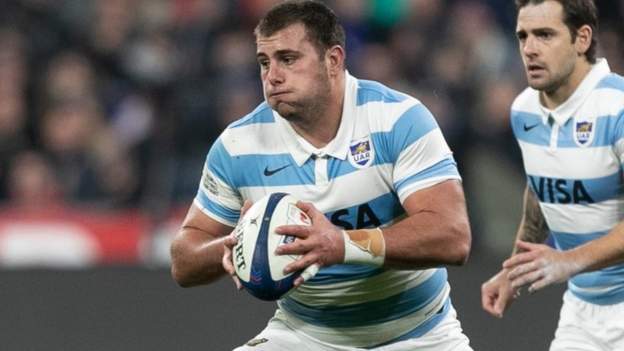 The injury-hit Premiership club, who have 20 players sidelined, have signed Martinez, 23, as cover for Ben Harris, who is out with a long-term injury.

But Robin Hislop is now their only fit loose-head - and they have had to turn to senior academy product Zac Nearchou.

Martinez won the first of his three Argentina caps in September and is the club's seventh short-term signing since the start of the season.

"He will provide vital cover for us in the front row, while we have some injuries in that area," said Wasps boss Lee Blackett. "He is an exciting young prop, who has impressed for Argentina."

"I am very excited to get the chance to play for Wasps in the Premiership and Champions Cup," said Martinez. "I would like to say a big thank you to Olimpia, I really enjoyed my time playing for them."

Martinez will follow in the footsteps of three previous Argentines to play for Wasps - fellow props Gabriel Bocca and Guillermo Roan, and lock Esteban Lozada, in 2013-14.

Wasps, ninth in the table, are in Premiership action this weekend with a Midlands derby against 12th-placed Worcester at Sixways.