Johanna Konta: 'I hope to inspire anyone who feels overlooked' 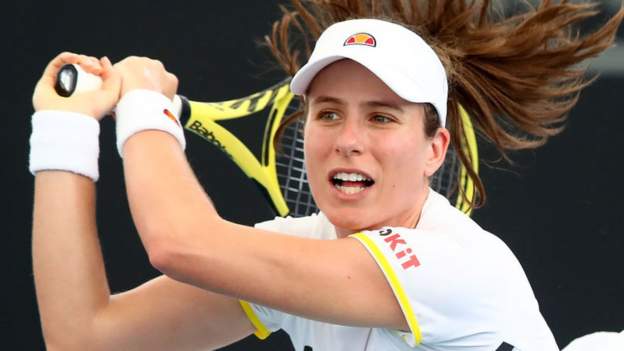 Johanna Konta retires hoping she can inspire those who feel too old or not talented enough to chase their dreams.

The ex-British number one, who won four WTA titles and reached three Grand Slam semi-finals, bowed out on Wednesday.

The 30-year-old said she was "maybe a poster child" of "someone who carved out a career when all evidence pointed that it was not going to happen".

"I am pretty sure most people will remember me as a very hard-working person," she told a news conference.

"If I can give any hope or any motivation or inspiration to anyone who ever felt like they were either too old or not talented enough or overlooked or anything along those lines, I think I would feel very happy with that.

"I definitely counted myself in that category with how people felt about my age or about my playing ability or things like that."

Konta was 24 when she broke into the world's top 100, which is relatively late in the sport, but once she had she rapidly rose up the rankings, peaking at number four in 2017.

"I am incredibly proud of myself for that because it was something that I carved out for myself and I did through resilience, hard work, dedication, passion and joy for the sport."

Konta achieved many successes that no other British woman had managed for many decades, including becoming the first in 39 years to reach the Wimbledon semi-finals in 2017.

And when she carried on playing through fatigue - having been seen lying on the floor in the gangway before the start of the third set - to help Britain win a Fed Cup tie in 2019, her resilience and importance to her team was at its most obvious.

And yet, despite a record 310 weeks as her country's number one player, she says she never felt it was her role to lead British women's tennis.

"I felt I was just a part of something that was bigger than myself. I felt privilege and I felt a lot of gratefulness to be able to represent my county at the biggest events in the world - at the Olympics, at our team's competitions."

There was no single moment or issue that triggered Konta's decision to retire - it was not the longstanding knee issue, the effects of the coronavirus pandemic or the desire to start a family - it was simply, she says, that she had nothing left in the tank.

"It was just because it felt like the time," she said. "It just felt like, where I was in my life and what the sport asks of you to do and give to be able to be at the best of it, I couldn't give that any more."

She leaves the sport with British tennis facing a bright future, Konta having been replaced as British number one by Emma Raducanu during the teenager's run to the US Open title in September.

What will Konta do next?

One of the first things Konta is doing in retirement is getting married to partner Jackson Wade, but she was tight-lipped about where or when the wedding would be, other than it is this month.

Having devoted her whole life to being good at one thing, she says she will now take some time to work out what she will do next.

For now, though, she is happy to hang up her racquet still feeling like one of those people she hopes her career will inspire.

"I finish playing this sport still loving the sport," she said. "And that is a really almost magical thing because it is kind of eternal - it had nothing to do with how old I was or how successful I became. It was literally a very innocent young girl's dream."