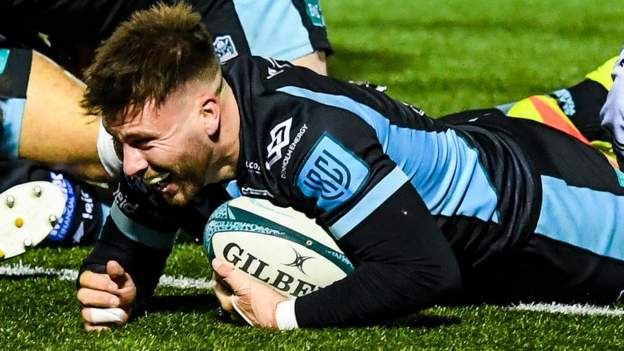 Glasgow Warriors moved up to fifth in the United Rugby Championship with a bonus-point win against Dragons.

Ali Price's try ensured the bonus point and Jonny Matthews got Glasgow's fifth of the evening.

Ellis Shipp went over for Dragons after the Price score and Mesake Doge reduced the visitors' arrears late on. Dean Ryan's side are 13th in the standings.

Amid a rising penalty count from Dragons, Tuipulotu powered over for the opening score and Ross Thompson added the conversion.

Josh McKay was making his first appearance for Glasgow and played an important role in their second try, his carry taking him past a couple of Dragons defenders before Thomson kicked cross-field for Scotland international Steyn to run over on the left. Thompson missed from the tee.

Dempsey got the third for Danny Wilson's side from the back of a scrum, speeding 30m to touch down, and Thompson got his second conversion.

McKay made an important tackle in the second half to curtail Sam Davies' attempt to score from his own chip over the top.

And Price broke off the back of a ruck for Glasgow's fourth try, Thompson adding the extras.

Shipp replied after Dragons went through the phases and Davies converted.

But Warriors re-established a 26-point advantage through Matthews' try from the back of a maul and Thompson knocked over his fourth and final successful kick of the evening.

Dragons inched forward in pursuit of a second try and were rewarded when Fijian prop Mesake Doge grounded. Davies converted.

Glasgow Warriors head coach Danny Wilson told Premier Sports: "We've got a good crop in the back row. I'm pleased for Jack Dempsey - he's been outstanding since he joined.

"I still think there's more to come from us. We've got to be more accurate, and the turnover rate was a bit high. For us to start trying a few things in attack gives plenty for opposition teams to analyse."

Dragons director of Rugby Dean Ryan told Premier Sports: "We were well beaten. It was a challenge for us to stay together in that second half - we could have imploded. We were so under pressure today, and I think the mistakes were a result of that.

"Jordan Williams looks like he may have broken his hand, unfortunately. We're finding it difficult with injuries but we need to stay together and keep improving."