Innovative pairs shine but not only combinations to attract attention 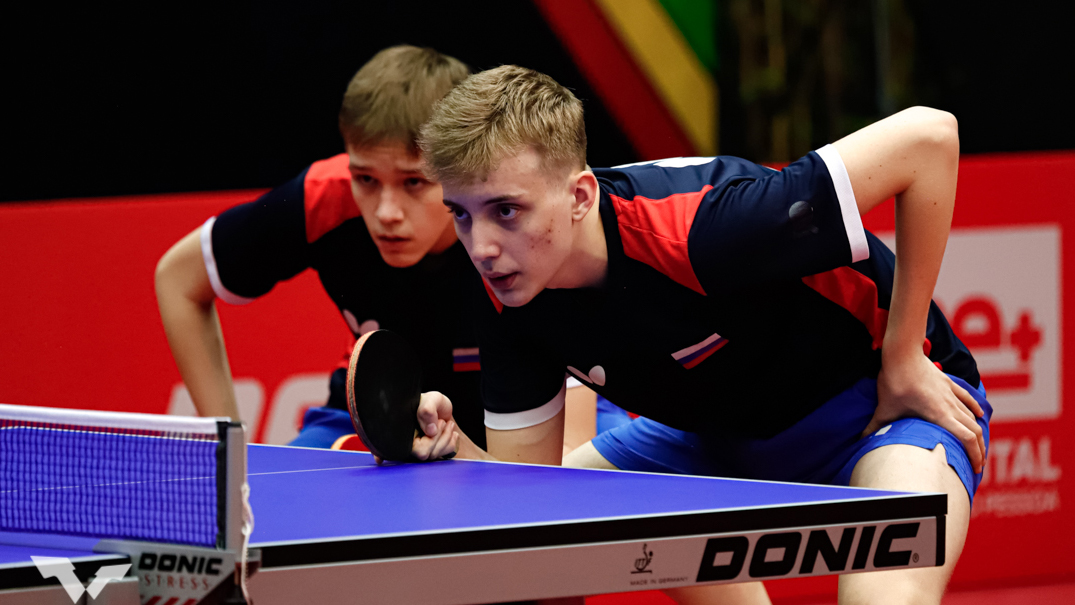 Both pairs occupied top seeded positions and duly advanced to the penultimate round, but they were not necessarily the partnerships to attract the attention.

The pair to attract the attention was Russia’s Ilia Koniukov and Roman Vinogradov; the boys’ doubles no.8 seeds. At the quarter-final stage they caused an upset of note, ousting the partnership formed by Belgium’s Tom Closset and Hungary’s David Szantosi, the no.3 seeds (11-8, 2-11, 12-10, 14-12).

They now meet Croatia’s Iulian Chirita and Dragos Alexandru Bujor, the no.2 seeds; a pairing that almost stumbled at the quarter-final stage. They needed the full five games to end the ambitions of the no.6 seeds, Germany’s Lleyton Ullman and Spain’s Daniel Berzosa (11-9, 11-7, 7-11, 7-11, 11-4).

In the opposite half of the draw, in the penultimate round Sora Matsushima and Felix Lebrun oppose the combination of Chinese Taipei’s Chang Yu-An and Singapore’s Izaac Quek Yong, the no.4 seeds.

One casualty in the boys’ doubles amongst the leading pairs; in the girls’ doubles not at all.

At the semi-final stage Hana Goda and Miwa Harimoto face Slovakia’s Veronika Matiunina and India’s Suhana Saini, the no.3 seeds; Germany’s Mia Griesel and Annett Kaufmann, the no.2 seeds, confront the partnership comprising Hana Hursey of Wales and Portugal’s Matilde Pinto, the no.4 seeds.

Surprise semi-finalists minimal; in the mixed doubles, life was very different; of the leading pairs, only Romania’s Iulian Chirita and Bianca Mei Rosu, the no.4 seeds remain.

Awaiting in the penultimate round is the Chinese Taipei pairing formed by Chang Yu-An and Cheng Pu-Syan, the no.21 seeds.

Meanwhile, in the opposite half of the draw, Sora Matsushima and Miwa Harimoto, the no.17 seeds, meet the combination of Poland’s Milosz Redzimski and Germany’s Mia Griesel, the no.11 seeds, for a place in the final.

Impressive performances, it was no different from Sora Matsushima and Miwa Harimoto; at the quarter-final stage they ended the hopes of Germany’s Lleyton Ullman and Annett Kaufmann (11-8, 11-6, 5-11, 12-10).

The semi-finals of the mixed doubles, in addition to the opening round of both the boys’ singles and girls’ singles will be played on Sunday 5th December.