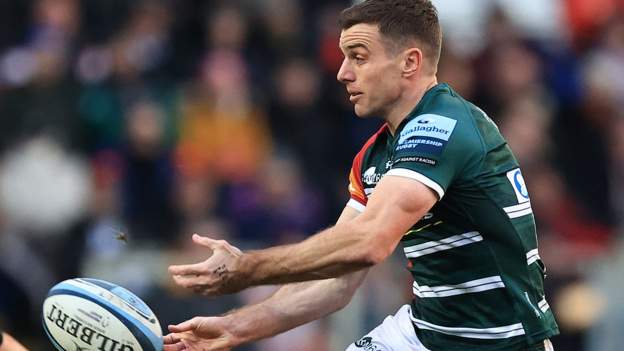 Leicester Tigers fly-half George Ford says he remains "100% committed" to the club despite agreeing a deal to join Sale Sharks next season.

The Tigers lead the Premiership with nine wins from nine and Ford has contributed an impressive 118 points to their cause.

He added 11 to that tally in Sunday's 16-14 victory over Harlequins.

"The best way I can show my commitment to this club is playing as well as I can week in, week out. There's an awful lot to play for in the rest of the season."

Leicester have won 12 games in a row - stretching back to a 38-31 win at Wasps at the end of last season, which saw them finish sixth in the table.

And their brilliant start to the 2021-22 campaign, under head coach Steve Borthwick, has some fans contemplating the prospect of a first Premiership title since 2013 - and first silverware since winning the 2017 Anglo-Welsh Cup.

However, despite the upturn in the club's fortunes, 28-year-old Ford said family reasons, and the chance to represent a team from the area in which he was born, proved too difficult to turn down.

"I love representing Leicester Tigers, it's a really special club and a great place to play rugby," the England international said. "I enjoyed my time at Bath as well, but I've always had this niggling thing that I'd love to go and play where I'm from one day.

"Since leaving school at 16, I came to Leicester for four years, I went to Bath for four years and I've been back here ever since. I've never had the chance to go and do it."

Ford added: "My grandparents struggle to travel and watch me playing. Maybe they can get a bit more of that next year, with my family there. And there's other things off the field, businesses which are up north as well.

"First and foremost, I thought it was a good rugby decision. I'm glad it's done so I can crack on here."

Leicester begin their European Champions Cup campaign on Saturday with a trip to Bordeaux, who lead the Top 14 table.