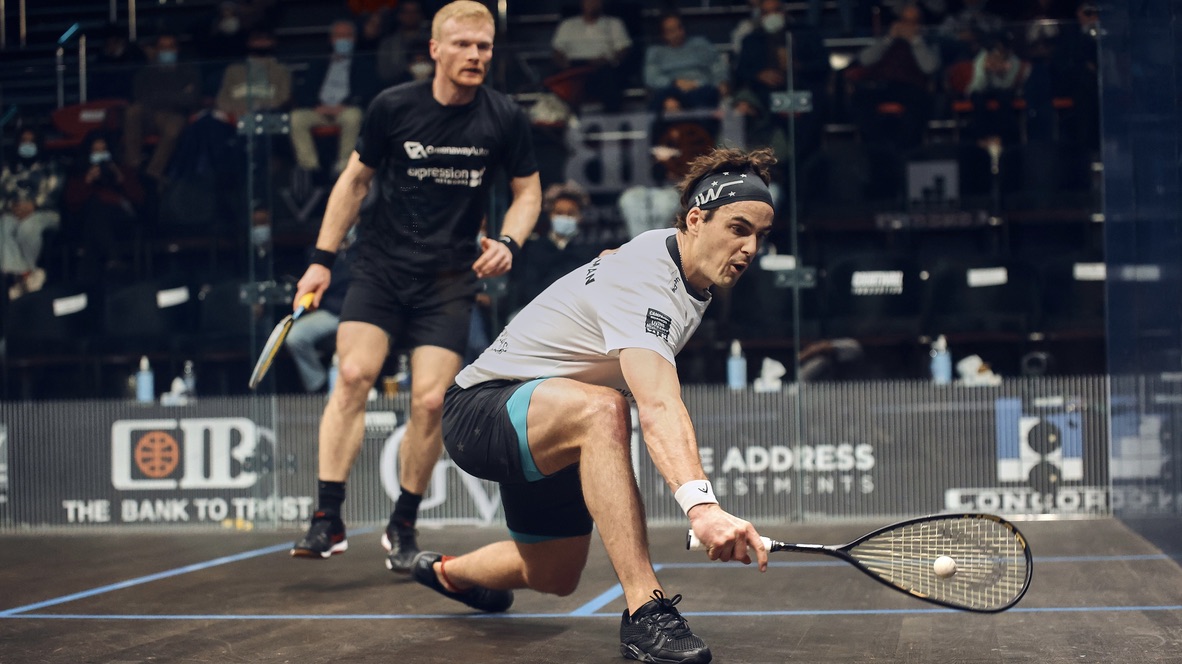 Joel Makin was cruelly robbed of a place in the Black Ball semi-finals when a sudden injury forced him to retire against Paul Coll, who admitted that the Welshman was playing some of his best-ever squash against him.

World No.2 Coll was mightily relieved to move through to the last four of the CIB Squash Open Black Ball as an adductor injury forced Makin to retire while leading by two games to one.

Makin played some sublime, controlled squash to take a 2-0 lead and put himself on the verge of a semi-final place at this PSA World Tour Gold event, but required attention from the physio at the start of the third game as he struggled with an adductor problem.

The World No.8 returned to court and battled on bravely but, after falling 11-9 as Coll halved the deficit, he ultimately decided he couldn’t continue to a fourth game and was forced to shake hands with his opponent.

“It’s horrible, he was playing really well,” said Coll. “He was super aggressive, he had a 2-0 lead and then you could see he wasn’t moving properly in the third. I was struggling to find my game on court today and he was sharp. I felt a bit unlucky in the second, but it’s just horrible to see him go off like that.

“I know how much work he puts into his training and to see him not finish a match is horrible. He pulled the third away from me, which I couldn’t believe. He was hitting some of the best shots he’s ever hit.

“It must be tough, especially when you’re playing well. It’s a horrible thing to happen to any athlete. I count my lucky stars today and I’ll turn up tomorrow ready to go.”

Coll will line up against World No.7 Marwan ElShorbagy for a place in the final after a masterclass from ElShorbagy saw him dispatch World No.4 Tarek Momen in four games.

Momen had won nine of their 10 matches on the PSA Tour, but ElShorbagy – who won the Platinum tier Black Ball event in March of this year – was sublime as he controlled the rallies and dictated the tempo of the match to win 11-6, 11-8, 8-11, 11-3 in 47 minutes.

“I don’t have the best record against Tarek,” said ElShorbagy. “The first thing I told him when I won is that ‘I finally beat you!’. Every time I lose to him, I go back and try to work something out.

“We have the same coach here in Egypt, so he can give me some advice, but I worked a lot of times with tactics with Nick [Matthew] a few times and I’m glad it worked today. He messaged me this morning and said you’re a different animal than any time you’ve played him.”

World No.1 Ali Farag and World No.6 Mostafa Asal will go head-to-head in the other semi-final following wins over Frenchman Gregoire Marche and former World No.1 Karim Abdel Gawad.

Farag was troubled after an impressive start from Marche – the only unseeded player to make it this far – but found his range in the second game onwards to complete a 9-11, 11-6, 11-5, 11-5 triumph.

“I’m super proud of winning today,” Farag said. “I don’t think I found my best performance and all credit to Greg, he didn’t let me settle. In the beginning I was too passive and my straight drives on the backhand side were too passive, they weren’t putting any pressure on him.

“I had to start firing myself up somehow, so I started yelling at myself and picked up the pace and I think I found my way from that point on.”

Asal returned to court after a controversial match against fellow Egyptian Youssef Soliman the day before, where a conduct game was awarded against Asal to punish him for his movement, but he was in fine form to beat Gawad 11-6, 11-7, 11-8 in 51 minutes.

“Karim is my favourite player, he’s my idol,” Asal said. “When I was 12 years old, I always had so many emotions for him and we are both from the same city and have played so much training and practice. He’s a big brother and I have so much respect for him.”