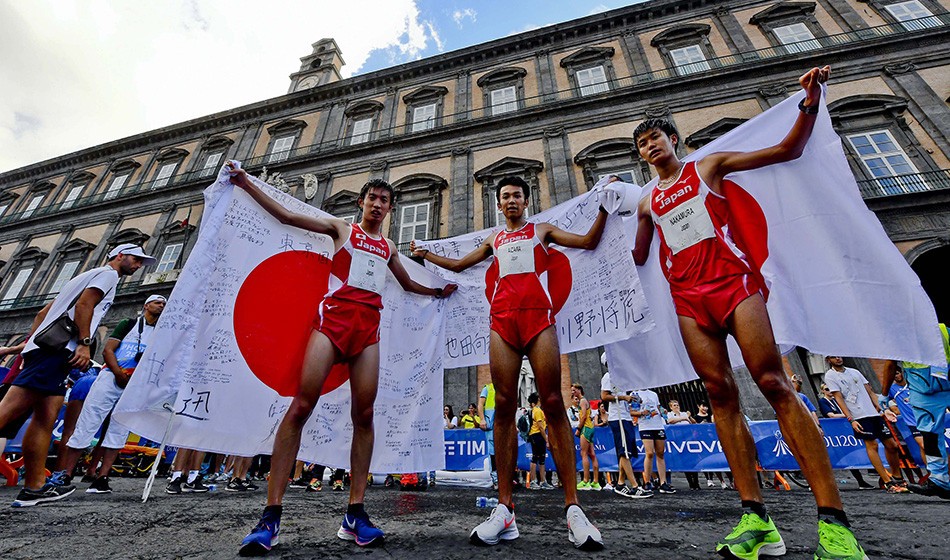 The Japanese long distance team completed a rare feat of taking home all six medals available in the half-marathon at the World University Games.

The streets of Naples were painted red and white following a triumphant team effort by Japan’s university athletes. In the women’s half-marathon Yuka Suzuki (74:10) led home Rika Kaseda (74:32) and Yuki Tagawa (74:36) to grab all available medals in the event.

The story was exactly the same in the men’s event. Akira Aizawa took the gold medal in 65:15 closely followed in by Taisei Nakamura (65:27) and Tatsuhiko Ito (65:48). It is needless to say that both teams also won the team events with top honours.

Back inside the stadium, Ukrainians Yuliia Chumachenko and Iryna Gerashchenko took top honours in the women’s high jump with Chumachenko jumping a personal best of 1.94m to beat her compatriot to the gold medal. Germany’s Imke Onnen equaled Gerashchenko’s height of 1.91m to take the bronze medal.

The men’s long jump was another close final. Japanese athlete Yuki Hashioka was the only athlete to jump over eight metres. His best effort of 8.01m gave him a clear win over second placed Yann Randrianasolo of France (7.95m). The battle for the bronze was incredibly close with Darcy Roper of Australia (7.90m) jumping a centimetre further than South African’s Gilbert Johnson to claim the medal.

The championships were concluded with a series of thrilling track races. Three athletes were all in contention for the gold down the final straight of the men’s 800m with Algeria’s Mohamed Belbachir (1:47.02) just managing to get ahead of Moroccan Moad Zahafi (1:47.64) and Czech athlete Lukas Hodbod (1:47.97).

Germany’s Caterina Granz took top honours in the women’s 1500m in a season’s best of 4:09.14. Australia’s Georgia Griffith was a very close second in 4:09.89 with Canadian Courtney Hufsmith taking the bronze in a personal best time of 4:11.81. Britain’s Dani Chatterton finished eighth in 4:16.32.

As with most big championship races, the men’s 5000m went off at a comfortable pace. Switzerland’s Jonas Raess was able to make the decisive move to take the gold medal in 14:03.10. France’s Yann Schrub was a very narrow second with 14:03.24 as the podium positions went to the last metre. Belgium’s Robin Hendrix was third with 14:04.06.

The relays are always an exciting finale to the end of a big championships and the World University Games proved to be the perfect platform for drama. Switzerland took the gold in the women’s 4x100m, clocking a time of 43.72 and beating Australia (43.97) and New Zealand (44.24) by fine margins following the disqualification of the Polish team.

Japan won yet another gold in the men’s event, clocking (38.92) with China second (39.01) and South Korea third (39.31). Favourites Brazil finished last in 1:23.05 after a baton drop while the Ghanaian team were disqualified.