Crowds in Wales can return from 21 January 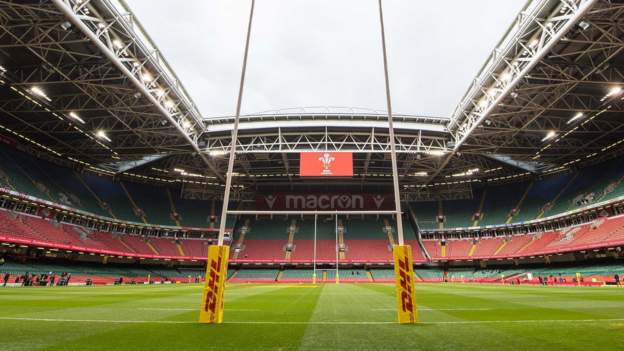 Crowds at outdoor events in Wales can return from Friday, 21 January after the Welsh government announced the lifting of Covid-19 restrictions over the next two weeks.

Restrictions will be lifted as Wales moves to alert level zero.

Outdoor events will be able to operate at full capacity from 21 January with indoor events resuming without restrictions from Friday, 28 January.

Mr Drakeford said Omicron cases are coming down "rapidly" and rules can be relaxed "gradually".

The Welsh government also pointed to the success of the booster campaign in enabling it to lift restrictions, with 1.8m having received an extra dose.

"As from tomorrow (Saturday, 15 January) the number of people who can take part in an event outdoors will rise from 50 to 500 and then on Friday of next week, 21 January, all outdoor activities will move to alert level zero," Mr Drakeford said.

"[There will be] no limits on the number of people who can take part in outdoor activities, crowds will be able to return to sporting events and outdoor hospitality able to operate in the way they would have earlier in the pandemic.

"Provided the numbers continue to reduce then on 28 January, we'll move alert level zero for all indoor activities and premises... hospitality able to operate indoors as they would have earlier on."

Cardiff City, Swansea City, Newport County and Wrexham will all be able to have fans in attendance from next weekend, though Swansea are the only side with a home fixture on Saturday, 22 January when Preston North End visit in the Championship.

"It's really positive and fantastic news for everyone, not just for football but for society in general," he said.

"The numbers seem to be going the right way so restrictions can be lifted. Hopefully it's the last time we ever have to deal with that."

Scarlets will be able to welcome back fans for their European Champions Cup home tie against Bristol on Saturday, 22 January.

The Welsh Premiership match between RGC and Cardiff on Saturday, 15 January will go ahead with fans permitted, with the number capped at 500.

The Cymru League, including the Cymru Premier, will resume in full from Friday, 21 January after a break prompted by the Covid restrictions.

The Cymru Leagues,Adran Leagues and Ardal Leagues were suspended shortly before Christmas.

Friday, 28 January will see fans return to Rodney Parade for Dragons v Benetton in the United Rugby Championship, while the following day supporters will be able to attend Ospreys v Edinburgh and Cardiff v Leinster.

Crowds will be allowed for indoor events from Friday, 28 January.

In ice hockey, Cardiff Devils will have to play three more home games behind closed doors before fans can return to Ice Arena Wales for their Elite League fixture with Fife Flyers on Friday, 28 January.

Indoor events resuming from 28 January gives the go-ahead for Welsh boxer Liam Williams' middleweight fight with Chris Eubank Jr at the Motorpoint Arena Saturday, 5 February to take place after fears it may be moved to another venue.

Premier League darts will also now be able to welcome fans at the same venue on Thursday, 3 February.

Parkrun events can also return after being suspended since 1 January.

The development also allows English club Chester, whose stadium is on the Welsh side of the Wales-England border, to welcome fans again to their home games in the National League North.

Mr Drakeford urged caution that all restrictions being lifted is dependent on data.

"Provided the numbers continue to fall this is what we will be able to do. We follow the data and we follow the science."

Scotland plans to scrap its restrictions on sports crowds from Monday, 17 January.