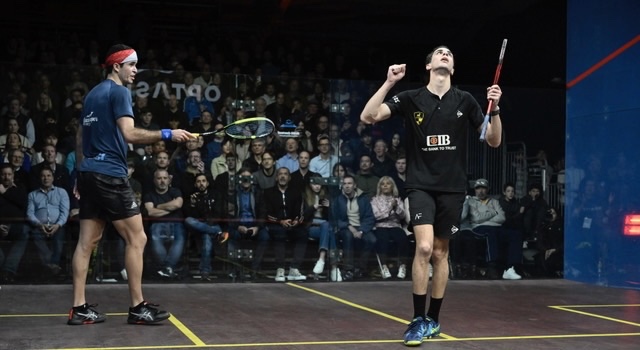 Egypt’s World No.2 Ali Farag shook off an injury sustained during his warm-up to overcome Peru’s World No.6 Diego Elias to win the Optasia Championships title in London.

The two were facing each other for the first time in a PSA final and it was Farag who held an impressive advantage in the head-to-head with 13 wins to Elias’ two. However, there was drama before the match had even been able to start as Farag required physio treatment after getting injured in the warm-up.

Once the match was able to get started following a delay, it was clear that Farag was struggling with his usual elegant movement as Elias was comfortably able to test his physicality, dragging him around the court to comfortably take the first game.

Former World No.1 Farag somehow found a way to dig deep in the second as he put his injury woes to one side to find his rhythm and get back on level terms at the PSA World Tour Gold event, formerly known as the Channel VAS Championships.

The Egyptian continued to have physio treatment in between games, which seemed to affect the concentration of Elias as he let himself get distracted in the third which saw Farag use the opportunity to sneak a 2-1 lead.

It was a tight finish to the match with both players not giving each other an inch. Elias saved match ball before holding a game ball opportunity of his own to take it to a fifth, but Farag was able to execute his shots to perfection to save it and then close out at the second time of asking to win his first major title on UK soil and 25th overall PSA title.

“First and foremost sorry for delaying the final,” said Farag during the trophy presentation. “It was an unfortunate incident at the very last minute before I got on court, in the last lunges I felt a spasm in my back.

“I really didn’t want it to happen, but I can’t thank Gerry, the PSA physio enough, they’ve worked magic and as long as they told me it couldn’t get any worse, I just kept pushing and adapting my game plan accordingly and I’m very happy with the way I got through it.

“My wife is playing a tournament at Black Ball in Egypt, so I have to be doing the parenting duties next week, while she focuses on her tournament and then I’ll be back training for the British Open at the end of the month.

“Finally, I get a hand on a trophy on British soil. I’ve reached six finals here, two of which were the Optasia and couldn’t convert any. I’m extremely happy to win finally here.”

The world’s top men will move across London to compete at the GillenMarkets Canary Wharf Squash Classic which begins on Sunday. The next women’s tournament is the CIB Black Ball Open in Cairo, Egypt, which takes place from March 12-17.