Why we must never take Jackie Robinson's story for granted 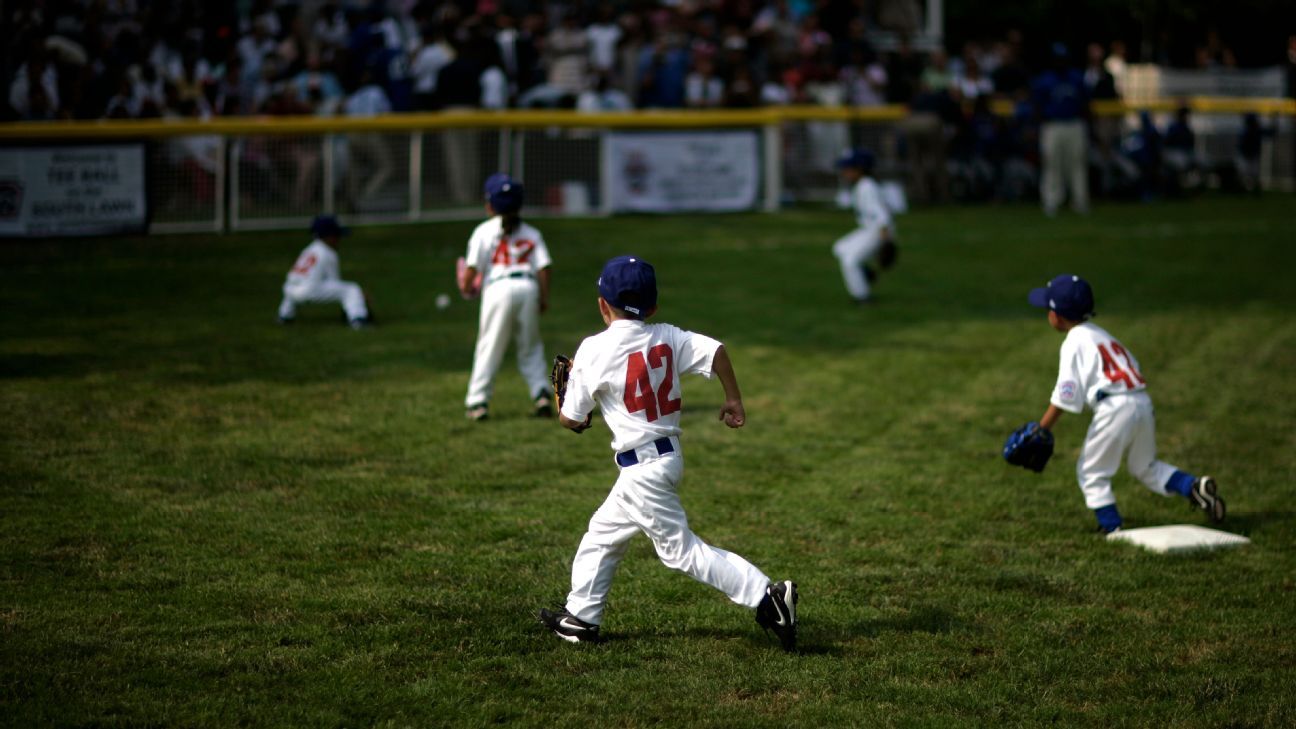 FIVE YEARS AGO, during one of my eldest daughter's first Little League games of the season, I noticed her bouncing around at first base on each pitch. It was clear she was imitating someone, and given the only game she'd seen me play in at the time was the Hall of Fame game when she was 3, she was definitely not copying me.

She proceeded to steal a base every chance she could.

When pressed to explain her sudden love affair with stealing bases and aggressively advancing on every pitch, she dropped one name:

Before that baseball season, my daughter, who is turning 13 this summer, had seen the movie "42" at home, with parental protection on full alert. We wondered if it was appropriate at her age, but we also knew Robinson's story was too important to miss an opportunity to share through a medium that speaks so well to this generation of fans: movie entertainment.

By this point, our four kids -- one son and three daughters -- already had a preliminary and personal understanding of some of the dynamics of race in America: that sometimes the weight and power of race knocks you off your feet, no matter how prepared you think you might be. But we still prepared them for the portrayal of the awfulness of Philadelphia Phillies manager Ben Chapman, as well as how Florida spring training would capture Robinson and his family being under constant threat.

The movie resonated, as demonstrated by my daughter's mimicry on the diamond. All of my kids would become fans of Jackie Robinson the baseball player right away, but it was just as important to my wife and me to tell them the story of the complete Jackie Robinson. The figure who testified in court, marched on the streets, opened a bank. Jackie Robinson wanted equality to mean an open door for anyone to play baseball -- or to do anything else.

Robinson spent his later life weaving his impact into other areas of American life. He had no intention of stopping progress at first base, and his post-baseball efforts became an extension of his Hall of Fame career, hitting the conscience of the board room, the political elite and the institutions of power, including MLB. When he retired, the line he crossed was not a finish line, but a starting one. His integration of baseball was an early domino in the civil rights gains that would come later, and even without a bat in his hand, he was part of those, too. This fuller picture of Robinson helps frame how he remains significant 75 years after he broke into Major League Baseball: It was the kind of change that reverberates and endures.

LIKE MY KIDS, I was introduced to Jackie Robinson's story when I was growing up in New Jersey. His story had always been larger than life for me, as it was for so many kids, young baseball players and to Black America. Jackie and his family are royalty to us and yet they somehow still feel close at all turns. But I was fortunate to get even closer through the opportunity Jackie helped give me -- a chance to play major league baseball.

I met his widow, Rachel, for the first time right before the 1991 MLB draft. As a 20-year-old, seeing her took my breath away.

When I was playing for the Phillies in 1998, Jackie's daughter, Sharon Robinson, embarked on a tour inspired by the principles of their family. It was called "Breaking Barriers," and one of the principles was education, so big leaguers would join Sharon in classrooms to talk about Jackie's story (the program still exists today). I was chosen to meet her in Philadelphia, the city in which I went to college and where I was playing, to meet with students. The opportunity was surreal -- it took me some time to absorb what it meant to be a representative of Jackie Robinson, to know that his daughter would share my story with the next generation ... to know that I had become a part of their story.

I've done extensive media work sharing the Robinsons' story over the past two decades, including an interview with Rachel in Cuba in 2016, and within it has always been a little bit of desperation, because I worry about how Jackie Robinson's legacy will endure. It is one of the greatest American stories ever, but like any story, with time, it can fade. A big step in sustaining it is sharing it with children young enough to be his great-great grandchildren.

I've seen the effect this has firsthand, after speaking with players on the UCLA baseball team, a team Jackie once played in his college days as a four-sport athlete. For my preparation to call the game between Stanford and UCLA on Jackie Robinson Day today, I interviewed two sons of my former teammate, Eric Karros. I learned how much they knew about Jackie, and how much their coach, John Savage, had committed to telling his story.

Then there was the day when my personal connection to the Robinsons extended to my own family. After meeting Sharon on that tour two decades ago, it has become a more grounded friendship. A few years back, the two of us had been playing phone tag, and she happened to call back when my eldest daughter was in the car. So they had a conversation. For me it was a mind-blowing experience -- listening to them talk about gymnastics and their childhoods, two daughters of big leaguers sharing notes. I just got out of the way.

In that moment, for my daughter, Jackie Robinson went from history to family.

Rev. Jesse Jackson explains how Jackie Robinson inspired him by challenging barriers in baseball and beyond.

THE PARTS OF Robinson's story that endure are universal examples of what we all seek from the world: relevance, respect, inclusion, fairness. Robinson did it with grace, fire, exceptional talent and a message that sought equality for all.

It helps that he could do this through sports -- as Kyle Karros said during my interview from the dugout at UCLA. "It's not like he was just some great athlete, which he was," Karros told me, "it's that he stood for so much more than just baseball ... he used baseball as a vehicle to impact so many people, and that's ultimately what we should strive to do, leave a positive lasting impact on the world we came into."

Baseball gave Robinson a microphone, and he used it to confront and change the world, not just to amplify his personal success on the field.

This is a wonderful lesson for any generation.

Sharon has written a few books about her family and her father's legacy, one of them a memoir about the year she turned 13 ("Child of the Dream: A Memoir of 1963") and another ("Stealing Home: An Intimate Family Portrait by Jackie Robinson's Daughter") about their home life during her father's "retirement" -- which was really anything but. (As Jackie would write in a letter to Dwight Eisenhower: "I have become more aggressive since I stopped playing.") They faced the same challenges any family would with a father who was on the go all of the time, being pulled in so many directions.

An entire nation -- including Martin Luther King Jr. and a long list of U.S. presidents -- was looking to her father. But he would carve out daddy-daughter days in New York. And he'd make time to check the ice on their lake to see if it was frozen enough for her to skate on. About this, Sharon would write one of the most beautiful passages I have ever read, in "Stealing Home":

It was Dad's official job to test the ice on the lake to determine its safety for skating. We kids lined up along the shoreline and shouted words of encouragement as Dad proceeded out onto the snow-covered ice. Before he placed one big foot in front of the other, he would tap the ice with his broomstick. After what seemed like forever, Dad would reach the deepest part of the lake, give one last tap with his stick, then turn to us and call out: "Go get your skates!" I thought Dad was very brave.

Now I think it even more. He was as brave then as when he entered baseball, a feat it took me years to appreciate. It dawned on me only gradually what it had meant for him to break the baseball color line, the courage it took for him to enter uncharted, and dangerous waters. He had to feel his way along an uncleared path like a blind man, tapping for clues. That was Jackie Robinson. And that was my dad -- big, heavy, out there alone on the lake, tapping his way along so the ice would be safe for us.

And he couldn't swim.

It was 75 years ago when Robinson played his first game with the Brooklyn Dodgers, breaking a color barrier in a major professional sport for the first time. It was also a world event, helping set off what would be the integration of a nation and inspiring everyone who understands the pain of trying to cross a color line. That line was more like a wall, covered in barbed wire, yet Robinson climbed it anyway.

He tested the ice for all of us, through his fearlessness, through moments of doubt, of love, of frustration -- the path to social change is never linear. He did all this not just for his children, but for the children of his dreams. He also left behind messengers and parents, mentors and coaches, who know that with all of his achievements, at his core he was always trying to be a better father, because that love always endures.

My daughter would go on to steal more than 30 bases that Little League season -- according to my calculations as an admittedly biased third-base coach. She jumped from base to base, often taking another one on a passed ball or a wild pitch. After realizing that only a few kids could throw strikes consistently, she stopped swinging the bat at all, deciding that was her best chance to get on base and show what she could do. She finished the season as a two-outcome girl: walk or strike out looking.

I told her that her strategy was sound, but that she wouldn't be able to keep it up much longer -- in the upcoming seasons, opposing pitchers would get better. It didn't matter to her, though. Once you feel like Jackie Robinson, you will always be Jackie Robinson.