Jasmine Joyce column: Staying up past bedtime to face France 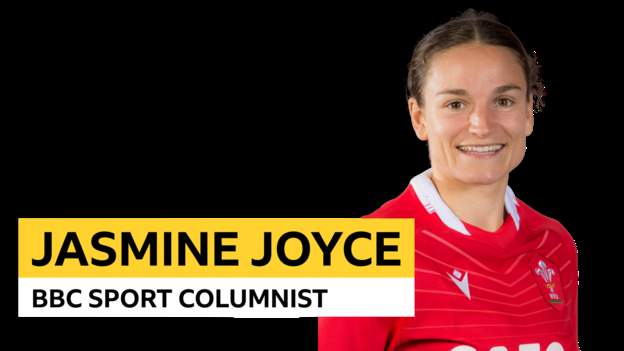 In her latest BBC Sport column, Olympic sevens star and Wales wing Jasmine Joyce talks about staying up past her bedtime, bathroom pranks and taking on another of the world's top teams.

It is Friday night rugby, France are in town and we cannot wait.

After a well-earned rest, everything is gearing up towards this game, and there is a real belief in camp we can go out there and get a result against one of the best sides in the world.

The England game was a tough test for us, it was a disappointing result, but we have had time to reflect and the important thing is we learned so much in defeat.

I do not think the final score of 58-5 reflected the performance, at half-time it was 19-0, it just got away from us in the end.

It is important we retain the ball more. Possession is everything, if we do not have the ball, we cannot score.

The back three have not had many touches, so we need to go looking for work, and when we do get ball in hand we look threatening.

We have to take inspiration from England though, they are four years ahead of us in terms of being professional, so that is where we want to be.

They have so much strength in depth, they could probably field three world class squads.

Wales have started developing girls to come through. I have watched a few of the Under-18s Six Nations games and the potential there is huge.

It is massive they now have that stepping stone to senior rugby, I cannot wait to see them.

I am 100% recharged coming into camp this week. We had the weekend off after the England game so I headed back to St Davids to see my parents for a few days.

The last weekend I had off before then was in December when I had Covid, and I could not really do anything, so this was well overdue.

Fair play to my mum, she cooked an absolute feast. On Friday night she made three curries, we had a barbecue on Saturday and then a Sunday roast, so I am well nourished!

I went to watch St Davids play rugby, I know a few of the boys, there were lots of dog walks and I went into the sea at Whitesands a couple of times, it was freezing!

It was a needed break for us, the camp before had been the hardest since January, but everything now is leading up to this France game.

They are away from home and everyone knows the French do not always travel well, the men or the women, so we are really up for this.

There is such a strong belief that not only can we go out there and perform against one of the world's top teams, but also get a result. That has not always been the case.

Staying up past bedtime

The late kick-off is tough, for me in particular as I am usually in bed by 8:30pm, so I will absolutely need an afternoon nap or I will be asleep by half-time!

We are quite lucky in that our other games have been evening kick-offs, so we are only really just looking at three hours more.

But it is a long day to stay focused on a game of international rugby.

We will have some breakfast in the morning, probably some games of Mafia, we will go for a walk and a coffee somewhere, and just chill out before the pre-match stuff.

I presume they will have us up later in the evenings to get us ready.

We are hoping for another big crowd at the Arms Park, last time it was a record of nearly 5,000, so we hope people can still turn out for the late kick off.

Snowy (Elinor Snowsill) is the biggest prankster in camp, she had Lleucu George a treat last week.

She was rooming with her and there was a light switch to the bathroom by Snowy's bed and every time Lleucu went to go in there she would flick it off.

Lleucu then asked Snowy to go in and it stayed on, she could not understand why it was just happening to her.

She was going around camp all week asking others if they had the same problem. Lleucu, to know her, is so straight, which made it even more hilarious.

Things like that really help the morale, we are all friends and we love to joke around.

But all heads (and bathroom lights) will be switched on come Friday night.

It is the fourth round and we want to get back to winning ways.

We believe and we want to be spoken about as well.