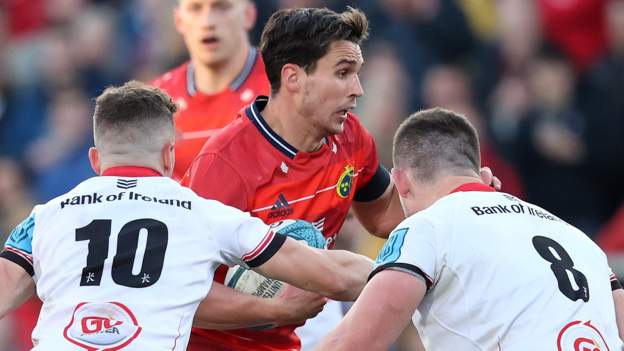 Munster held off Ulster's second-half fightback to claim a deserved win that lifts them above their northern rivals in the United Rugby Championship.

The visitors led by 12 points at half-time in Belfast thanks to tries from Stephen Archer and Keith Earls.

Ulster fought back with scores from Rob Herring and Sean Reidy to at least salvage a losing bonus point.

However that is only scant consolation for a side that have lost four of their last five games.

If the Sharks were to beat Leinster with a bonus point in Durban on Saturday, Ulster would find themselves fifth in the URC table and out of the home quarter-final places having started Friday in second.

Despite a rousing finish and the brief threat of a late turnaround after Reidy's 75th-minute try brought them to within four points, the northern province were far from their best for much of the contest as Munster took a controlled win without hitting top gear.

Ulster restricted to three points in first half

This week's announcement that the URC final will be held at the home venue of the highest ranked side provided additional motivation for both provinces going in to the final three games of the regular season.

By the time they kicked off in Belfast, Ulster had already slipped to third in the table thanks to the Stormers' early win over Glasgow.

The northern province's first half showing was far from the defiant statement they were hoping for as they were comfortably blunted by an untroubled Munster defence.

Archer put the visitors ahead in the 22nd minute with a close-range try that came after they regathered an overthrown line-out on Ulster's five-metre line.

Too often the home side found themselves moving side-to-side, unable to get beyond the gainline to disrupt Munster's defensive shape.

When they turned the ball over in midfield after 28 minutes the visiting backs found the kind of space their opposite numbers had been craving, as the ball was moved right for Chris Farrell to surge through a gap before drawing Ethan McIlroy and sending Earls in.

Finally when Ulster did create some space of their own and released Stewart Moore into the 22 late in the half, the full-back threw an ill-advised offload straight into touch.

To add to Ulster's concerns, captain Iain Henderson did not reappear after half-time as they sought to climb back into the contest.

Herring struck back nine minutes after the interval as Ulster's maul delivered to breathe life into an understandably flat Kingspan Stadium with the arrears reduced to eight points.

However with control of the game established, Munster were able to hold their inter-provincial rivals at arm's length with Joey Carbery adding two penalties to ensure they remained in possession of a two-score cushion.

Ulster did rally in the final quarter, with Bradley Roberts and Robert Baloucoune fighting hard to win turnovers in Munster territory, but the hosts failed to capitalise with points in either case.

Having been handed his first start at fly-half of the season, Michael Lowry struggled to make an impact but looked instantly more comfortable when he moved to full-back for the final 10 minutes as Ian Madigan came on.

Veteran Madigan provided Ulster with some real tempo as they threatened the Munster line again with Shane Daly sent to the sin bin for kicking the ball out of a ruck.

When Reidy drove over from a metre out, Ulster had a sniff of an unlikely late turnaround but that would prove to be the last time they found themselves in Munster territory.