Cabrera's chase for 3,000 on hold after rainout 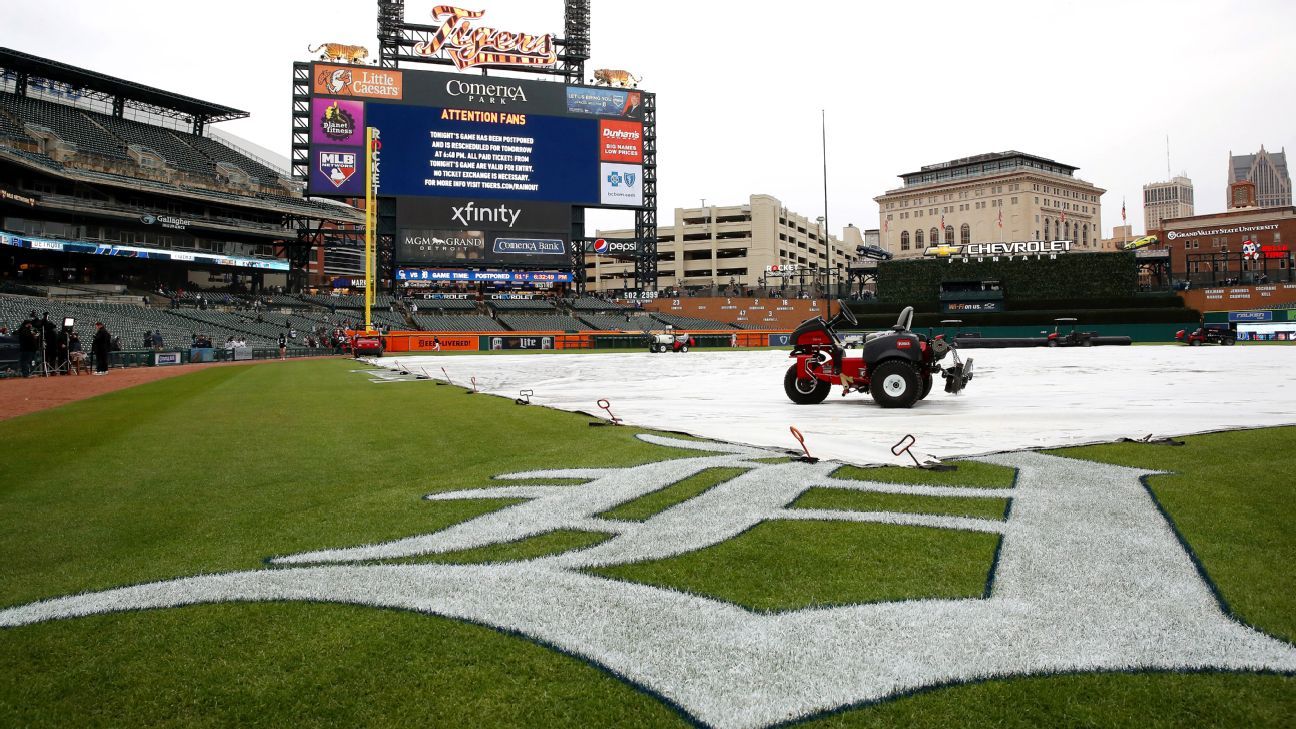 DETROIT -- History is on hold in the Motor City.

Miguel Cabrera's quest for his 3,000th hit was delayed for at least one more day when the game between the Detroit Tigers and Colorado Rockies scheduled for Friday night was rained out.

The game was called about an hour before it was supposed to begin at Comerica Park. Cabrera has 2,999 career hits, a total he reached with a three-hit game on Wednesday.

Cabrera acknowledged the milestone means a lot to him, adding he has been emotional just thinking about it this week.

The Rockies and Tigers will make up the washout with a split doubleheader Saturday. The games are set to begin at 1:10 p.m. and 6:40 p.m.

Detroit plans to start right-hander Tarik Skubal (0-1, 3.72) against Colorado righty Antonio Senzatela (0-1, 2.16) in the first game of the twin bill.

The Tigers pushed right-hander Beau Brieske's major league debut from Saturday afternoon to evening, matching him up with lefty Austin Gomber (0-1, 7.00) in the second of three scheduled games at Comerica Park.

Light rain postponed the series opener with more of the wet stuff on the way the rest of the night. On Saturday, it was expected to be sunny with a high temperature of 81 degrees.

Cabrera was intentionally walked in the eighth inning on Thursday, setting off a loud chorus of boos before the Tigers went on to beat the New York Yankees 3-0.

The 39-year-old Cabrera is a hit away from becoming the 33rd major leaguer to reach 3,000 hits and the first Venezuelan player to pull off the feat.

He is also a hit away from becoming the seventh player with 500 home runs and 3,000 hits. The exclusive club includes Hank Aaron, Willie Mays, Eddie Murray, Rafael Palmeiro, Albert Pujols and Alex Rodriguez.

Among those all-time greats, Cabrera will join Aaron and Mays as the trio with a batting average of .300 or better.

"That's even more special company," Hall of Famer and former Tigers shortstop Alan Trammell said Friday in Detroit's dugout. "He's going to go down as one of the best hitters of all time.

"He realizes that it's getting toward the end, but he still has something left in the tank. When it's all said and done this year, I think he's going to have a heck of a year."

Cabrera won the Triple Crown in 2012, becoming the first to lead the league in homers, RBIs and batting average since Carl Yastrzemski did in 1967. The two-time American League MVP and 11-time All-Star has won four batting titles, hitting .348 when he was voted the league's top player in 2013 for a second straight year.