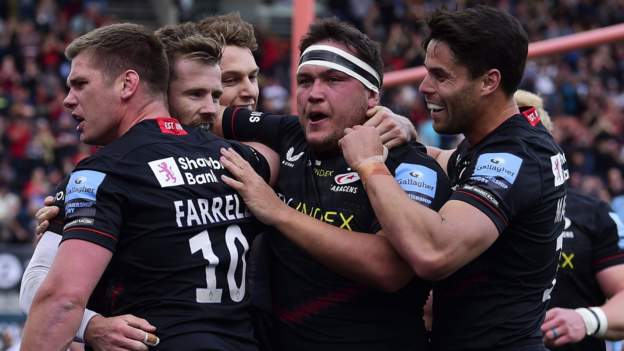 A powerful second-half display helped Saracens beat Exeter 38-22 at StoneX Stadium to secure their place in the Premiership play-offs.

Elliot Daly put Sarries 10-3 up, but Exeter roared into a 15-10 half-time lead with two tries in five minutes from Sam Skinner and Olly Woodburn.

Saracens' fifth straight win cut Leicester's lead at the top of the Premiership to four points, but a third league defeat in four left the Chiefs' play-off hopes in the balance.

They sit a point behind fourth-placed Northampton, and level on points with Gloucester, in sixth, having played a game more than both.

After Slade and Farrell traded early penalties, Daly picked a superb line, bursting onto Aled Davies' precision pass at pace to split the Exeter defence in half and race in from 20 metres.

Defences bossed the opening half-hour, but Exeter deservedly broke through, battering away at Sarries before Henry Slade's acceleration allowed him to make good ground and set up Scotland international Skinner to burst through.

The Chiefs' physicality continued to soften up the home defence with wave after wave of surges before Ian Whitten's fine pass sent Woodburn through the middle for their second score.

Exeter almost went over again straight from the restart as Whitten took the kick-off and roared upfield, but Alex Goode ripped the ball back on his own line after another good burst by Stuart Hogg.

But Sarries turned the game around in devastating style after the break.

Farrell followed up his penalty with a superb break, carrying play deep into Chiefs territory before quick phases teed up Maitland's scorching finish under the posts.

The England captain's boot extended the lead to 23-15 as Exeter conceded a string of penalties before Tompkins was driven over as Saracens racked up 18 points in as many second-half minutes.

The Chiefs were held up over the line, while Theo McFarland and Farrell both won turnovers metres from their own line as the hosts defended fiercely to deny the visitors a way back.

Earls' sensational breakaway try then sealed the bonus point to cap a stunning second-half display before Stuart Townsend went over late on for Chiefs' third try.