Emma Raducanu: US Open trophy to be taken on tour of schools across UK 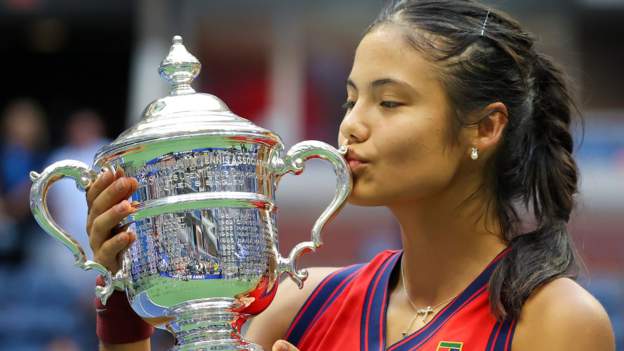 Emma Raducanu hopes to inspire the next generation by taking her US Open trophy to schools across the United Kingdom.

The 'Emma Raducanu Trophy Tour' will begin in London on Monday, 9 May and finish in Edinburgh on 13 May.

"My hope is that the trophy will inspire them to continue their tennis journey both inside and outside of school," Raducanu said.

Raducanu became the first qualifier in the Open era to win a Grand Slam during her astonishing run in New York in September.

She has struggled with injury and consistency since then and was hampered by a back injury in her third-round defeat at the Madrid Open on Monday.

"What Emma achieved was incredible and we want to use her success to get more school children playing tennis and encourage our future tennis stars," Scott Lloyd, chief executive of the Lawn Tennis Association, said.