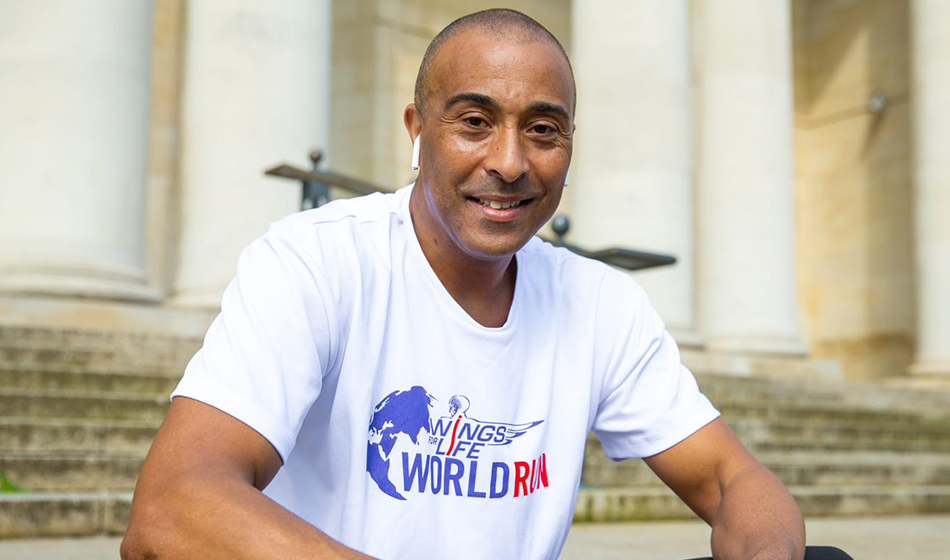 The ninth edition of Wings For Life World Run – an event hosted by Red Bull and one which raises money for spinal cord research – takes place on May 8.

Unlike the majority of mass participation events, this one is virtual and takes place at the same time all over the world.

There is no finish line but instead each runner must run as long as they can before getting caught by a virtual catcher car that they can see when they download the app. The catcher car speeds up as the race goes on so at some point everyone is caught.

Colin Jackson – Olympic silver and double world 110m hurdles champion – is one of the ambassadors for Wings For Life World Run and is excited for the 2022 edition. Last year, 184,236 participants from 195 nations took part.

Amazing to hear from @ColinJackson and @100StevenDowd on the importance of @WFLWorldRun which takes place on May 8 ?

It’s a running event worldwide where people run at exactly the same time through an app, raising money for spinal chord research. pic.twitter.com/wTT4ElGZeU

“One of the most powerful messages that we’ve always found and that is galvanising for everybody is the sense of hope,” Jackson says. “The fact that we can get this message across through the global running community is just great as every single day you see somebody running for one reason or another. We want to give humanity hope.

“People run. What we wanted to do is to alter the shape of the wheel a tiny bit by not having a finishing line of a distinct distance. If you’re a great runner it’s the case of seeing how far you can go. This can happen all over the world and you are part of a single running event.

For Jackson, the aim is to get a million people across the world running at the same time, a target which could be helped by Red Bull athletes Mondo Duplantis or Karsten Warholm.

Having an app means that unlike a marathon, runners from any country on the globe can take part and it’s not surprising that over 925,000 have participated in the nine years of the event with £33.3 million raised for spinal chord research.

Check your phone and app are GTG: https://t.co/Tv8SLafEAE

What do you ? about the Wings for Life World Run?

“I’ve been really fortunate to go to some of the clinics and see some of the amazing research that has been done already on spinal cord injuries,” Jackson adds. “You know some bright people in your life but these people are just incredible and their resilience is understated.

“If you’re trying to keep your lab alive, you’re just about to have a massive breakthrough and your funding runs out you can imagine how frustrating that must be. The help from Wings for Life allows these labs to sustain that work.”

“I think technology is great. It’s certainly helped our event come alive and we were quite ahead of the game in what we were thinking. We knew that with this amount of people running at the same time they’d be generally running on their own streets and you can imagine the city centres we’d have to close for a general event.

“We’ve got info shoes and info spikes and I think this app and what it allows is great for the sport.”