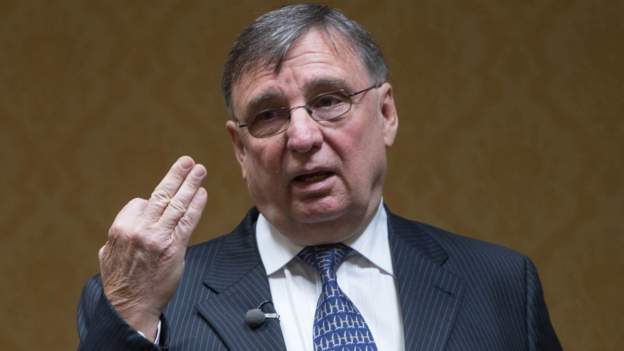 The man who brought about the existence of Wales' four professional teams says they should be replaced by three clubs.

He says Welsh rugby is a global "laughing stock" and WRU-owned Dragons should be ditched unless bought out.

"There's a saying isn't there: the definition of insanity is doing the same thing over and over and expecting a different outcome," he said.

Moffett's belief that Welsh rugby can sustain only three professional teams mirrors that of a proposal to cut a Welsh region which emerged in a report commissioned by the Professional Rugby Board (PRB).

The PRB runs the professional game in Wales, with members from the four regions and WRU sitting on the board, which has Malcolm Wall as an independent chairman.

Debates over Welsh rugby's structure resurfaced after a fifth-place finish in the 2022 Six Nations and with none of its regions making a significant impact in Europe or the URC.

Moffett said Welsh rugby "is at war with itself continuously" and questioned the WRU board and leading figures' ability to improve the game's fortunes at international and domestic level.

"I don't know what the board and executives have by way of key performance indicators, but obviously they are not fit for purpose because if they were you would have seen in the last 10 to 15 years an improvement in the Welsh rugby set-up - in fact, it's going backwards," he said.

Moffett added: "I've said for some time that regional rugby and the concept that I put in place has not worked, mainly because the Welsh believe that they've got a mortgage on parochialism, and that parochialism can work for you or in this case against you.

"So for a couple of years now I've been suggesting it was right for the time, it's obviously not right now, so scrap it, just have three club-based teams.

"It's not going to make any difference to the number of people that actually support them because the regions are not being supported now anyway."

Dragons are again Wales' worst-performing team, with two URC wins and a draw from their 16 games so far in 2021-22, and Moffett says they should not be "sacrosanct" as WRU-owned.

Moffett said: "My three teams would be Llanelli, Swansea and Cardiff, but I'll put a caveat on that - I could live with Newport instead of Swansea because they are so close to Llanelli, only on the basis that they [Dragons] became privately-owned like the other clubs and that the WRU gave up ownership."

He added: "The WRU should not have a free pass on what they've done by taking over Newport [Dragons], they've kept the game relatively poor because of their poor financial management and something's going to break."

Moffett says the WRU is unable to afford four teams because "the only thing they seem to be able to do is just cut, cut and cut costs".