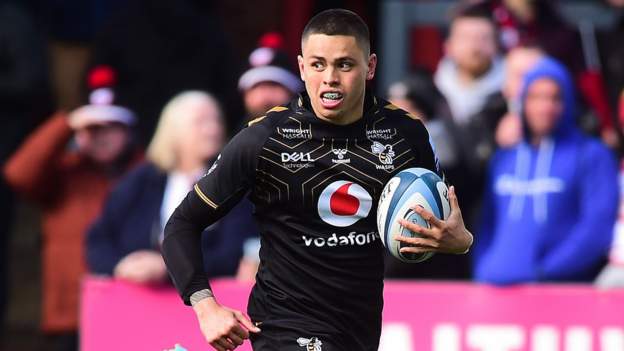 Head coach Lee Blackett makes two changes for the trip to Lyon as Wasps look to win in France and reach their first European final for 15 years.

Jacob Umaga steps up from the bench to start at full-back for the first time since the 41-12 Premiership win over Worcester on 23 April.

And Malakai Fekitoa returns at centre, with Sam Spink dropping to the bench.

"These are the moments you do it all for, to get to knockout stages of competitions," said Blackett.

Unchanged Lyon dominated their group, winning all four matches before beating both Warriors - Worcester and Edinburgh - in the knockout stages to reach their first European semi-final.

"They are a team in form, a big collision team. The way they came back at the weekend against Glasgow, at the end it looked like they won comfortably.

"They score tries from broken field, and if it comes down to individual moments they've got people that can harm you, that's for sure," Blackett told BBC Coventry & Warwickshire.

Wasps, who are again captained by Joe Launchbury, won the Challenge Cup in 2003 when they beat Bath in the final, but their last European triumph was in the Champions Cup in 2007.

A winners' medal would be the perfect way for Jimmy Gopperth to end his seven-year career with the club, having agreed to join Leicester Tigers for next season, and he lines up at centre alongside Fekitoa after scoring one of the tries in last week's 34-30 quarter-final victory in Edinburgh.