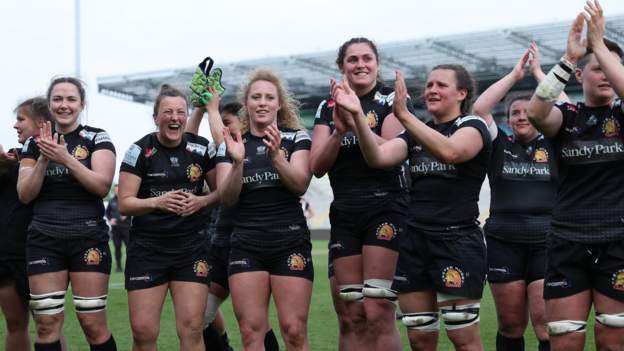 Exeter Chiefs will host Bristol Bears in their Premier 15s semi-final after beating the same opposition 29-26 on the final day.

Defending champions Harlequins face a semi-final away at Saracens in a repeat of last year's final.

Quins won their first title last May with victory over Sarries, who finish the regular season top of the table.

Both semi-finals will take place on Sunday, 22 May.

With all three previous finals contested by Saracens and Quins, there will be a first-time finalist in this season's showpiece at Worcester's Sixways Stadium on Friday, 3 June.

The story of the final day

The pick of the final day fixtures came in the end-to-end game at Sandy Park as Bristol travelled to Exeter in a match aired live on the BBC Sport website.

Jennine Detiveaux ran in from 40 yards to open the scoring for Chiefs before Bears responded 20 minutes later through Grace Compton. Amber Reed's conversion saw the Bears edge in front.

Detiveaux got her second of the day upon collecting Patricia Garcia's kick through, but Bears led at the interval after prop Sarah Bern crossed.

Kate Zackary and Courtney Keight exchanged tries but Emily Tuttosi put the hosts ahead before Bears Keight and Rownita Marston were both sent to sin-bin within minutes of each other.

Chiefs made their two-player advantage count as Zackary scored her second of the game, and even after Delgado's late red card and a Bears try through Lucy Burgess, the hosts held on.

Loughborough Lightning ended their season with an impressive 22-17 win over defending champions Harlequins.

Sadia Kabeya powered over for Lightning's third but Katy Mew's try reduced the deficit to three points at the break.

Vickii Cornborough added more pressure on Lightning in the second half but with four minutes remaining Hallie Taufoou scored to hand the hosts a hard-earned victory.

Top-of-the-table Saracens made a stirring comeback to end the regular season on a high with a 31-26 win over Wasps.

The visitors led by 21 points within 30 minutes as Chris Balogun, Bryony Cleall and Ellie Boatman all crossed.

Alysha Corrigan scored Saracens' first before Amy Wilson-Hardy added a fourth for Wasps. Then the game turned as Marlie Packer, May Campbell, Holly Aitchison and Alev Kelter all scored second-half tries to complete the turnaround and hand Sarries victory.

Eighth-place Worcester Warriors racked up a half century as they beat ninth-place Sale Sharks 51-26.

Both sides scored two tries early on - Caryl Thomas and Vicky Laflin for Warriors and Amy Orrow and Evie Tonkin for Sale.

But then Worcester opened the floodgates as Jade Shekells scored either side of half-time, Paige Farries and Sioned Harries both scored two tries each and Carys Cox also got on the scoresheet.

Lizzie Duffy scored a consolation for the visitors.

Bottom side DMP Durham Sharks ended their winless campaign with another humbling defeat after going down 67-0 at home to sixth-place Gloucester-Hartpury.

The Cherry and Whites ran in 38 first-half points as Ellie Underwood scored twice, along with tries for Lleucu George, Bethan Lewis and Zoe Aldcroft.

The onslaught continued after the break courtesy of tries from Rachel Lund, Emma Sing, Lucia Scott and two more from Underwood.