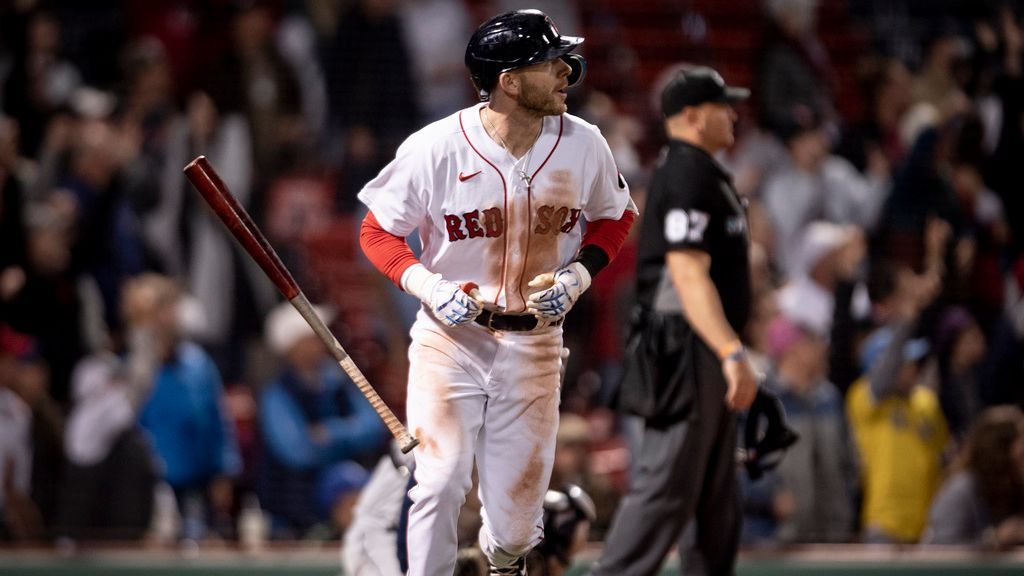 BOSTON -- Trevor Story had 3 homers, 4 hits, 7 RBIs and a stolen base to help the Boston Red Sox rally from a four-run deficit to beat the Seattle Mariners 12-6 Thursday night.

He became the first second baseman in MLB history to steal a base in a three-homer game, according to the Elias Sports Bureau. He also joined Jim Tabor as the only Red Sox players with 5 runs, 3 dingers and 7 RBIs since RBI became an official stat in 1920.

Story slugged a pair of two-run homers and a three-run shot in the eighth, and he also singled in the go-ahead run in the sixth with the help of a wild throw. In the first season of a $140 million, six-year contract, Story had just two homers in 32 games entering Thursday.

"The at-bats are getting better," manager Alex Cora said. "He keeps working hard at it and he's a good athlete. He will hit. We know that. He's feeling comfortable in the environment and it's just a matter of time. Today was outstanding.''

Story entered the game batting .205 with 16 RBIs. By the time it was over and his third homer of the night had bounced off Lansdowne Street, his batting average was up to .230 and his homer total more than doubled.

"Just a special night and one I'll never forget,'' said Story, who also homered three times in a game for Colorado against San Francisco in September 2018.

Boston fans have been waiting for Story's offense to kick in and were thrilled with his performance Thursday.

"Just very simple stuff, just trying to be more balanced and be on time,'' Story said. "I think that's about as simple as I can put it. I'm not trying to do too much and I think that works really well for me.''

Jackie Bradley Jr. added an RBI double off the Green Monster as Boston scored nine straight runs and won for the fifth time in seven games.

The Red Sox got four scoreless innings of relief from Tanner Houck (3-3) after Seattle roughed up starter Rich Hill over the first two innings for a 4-0 lead.

Dylan Moore hit a three-run homer in the second for Seattle, which lost for the third time in four games and fell to 3-4 on a lengthy trip that still has three games to go in Boston.

Ty France added an RBI double in the second as the Mariners chased Hill. Houck (3-3) came out of the bullpen and shut down the Mariners over the next four, striking out six and allowing just one hit and one walk.

Seattle rookie George Kirby (0-1) lasted until the sixth but was pulled after Alex Verdugo's leadoff double off the wall in center.

Although Kirby couldn't pick up his first win in the majors, he was on the hook for the loss after Story looped a single off of Moore's glove into center, and Verdugo scored when Julio Rodriguez's throw skipped past third and bounced off the wall outside the Seattle dugout. Story took second on the throwing error, stole third and scored easily on Bradley's double high off the Monster to put Boston up 6-4.

Story cut Seattle's early lead in half with a two-run homer to center in the second, then tied it in the third with another two-run drive that cleared the Green Monster and made it all the way out of Fenway Park. He then connected off Young in the eighth, this one also over the Monster and onto Lansdowne Street.

It was the 19th multihomer game of Story's career.

Rodriguez added a solo homer for Seattle in the ninth, his third.

The Associated Press contributed to this story.