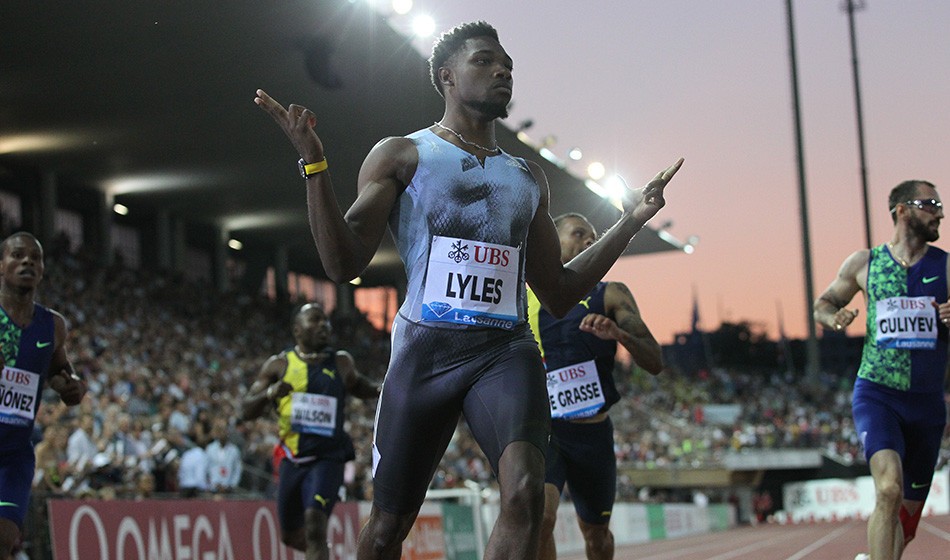 Arguably the best-standard championships after the Olympics and Worlds will again be high-calibre thanks to the cut-throat selection procedure of which they form a part.

The first three athletes in every event at the Toyota USATF Outdoor Championships, taking place from July 25-28 in Des Moines, Iowa, will win selection for the IAAF World Championships in Doha provided they have gained the IAAF qualifying standard by this weekend.

Such is the depth of standard in the world’s No.1 athletics nation that this means podium placings in most events will be crucial.

Noah Lyles (pictured above), who produced a stunning 19.50 200m earlier this month, will compete only in that event despite being world ranked No.2 in the 100m. However, Christian Coleman, who leads the world rankings in the short sprint, will be going for the double.

Over 100m, world champion Justin Gatlin will be his main opposition, while Cravon Gillespie, who was second at the NCAAs with 9.93, will also be one to watch.

Michael Norman hinted at 2019 being a world record year with his 43.45 in April and is the standout in the men’s 400m. The top two at the NCAAs, Kahmari Montgomery and Trevor Stewart, plus Fred Kerley, will be chasing.

Perhaps more likely to threaten the world record is Rai Benjamin in the 400m hurdles. The world No.1 has clocked 47.16 this season, although he may need stronger competition than here to spur him on to beat Kevin Young’s 46.78.

World junior record-holder Sydney McLaughlin heads the women’s event, with Olympic and world champion Dalilah Muhammad (pictured below) challenging. Kori Carter goes in the 200m instead, knowing she has a bye for selection as defending champion.

New world under-20 record-holder (10.75), Sha’Carri Richardson looks to do the NCAA/USATF double over 100m. In the 200m she is set for another close battle with collegiate champion Angie Annelus, who ran a winning 22.16 there.

World 100m champion Tori Bowie is entered for both sprints. World 400m champion Phyllis Francis opts for the half-lap as her selection in her main event is already in the bag.

The men’s triple jump should see a great match-up between Will Claye, who leads the world rankings with 18.14m, and Olympic and world champion Christian Taylor.

Claye will also attempt to win the long jump, where Olympic champion Jeff Henderson is looking for better form than of late.

The in-form world champion Sam Kendricks (pictured below) goes in the pole vault, where Christopher Nilsen is expected to offer the main threat. The women’s event should be more open as world No.1 Jenn Suhr, world indoor champion Sandi Morris and Katie Nageotte, who won in Lausanne, square off.

After her recent return to form, former world indoor champion Vashti Cunningham should be a class apart in the high jump.

World steeplechase champion Emma Coburn lines up her event with London 2017 silver medallist Courtney Frerichs and Colleen Quigley. However, due to a foot injury, Evan Jager will not be going for an eighth straight US title.

In the men’s 800m, Donavan Brazier is quickest this year as Olympic bronze medallist Clayton Murphy looks to challenge. Ajee Wilson will be favourite in the women’s two-lap race.

In the throws, Ryan Crouser, who earlier this year produced the best shot put in 29 years, and Chase Ealey, who won a Diamond League fixture this year, star in the shot circle. Deanna Price and Brooke Andersen go head to head in the women’s hammer, while Valarie Allman will be favourite in the discus.

The event will also be used as the basis for selection for the Europe v USA match in Belarus and Thorpe Cup combined events match in Germany in September.

An event schedule can be found here, while start lists are here.