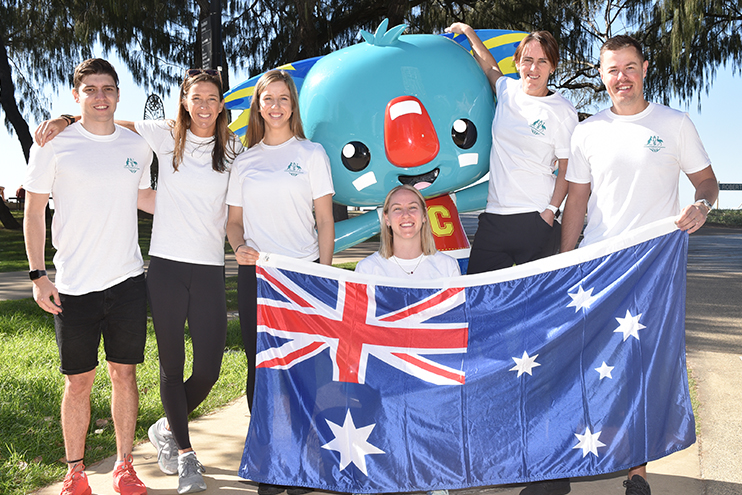 Australia are sending a hugely experienced squad to the Commonwealth Games, led by 45-year-old Rachael Grinham, who will be making a record-equalling sixth appearance in the competition.

Grinham has won two golds, in the women’s doubles in 2006 and the mixed doubles in 2014, and has collected six other medals during an an incredible career. And she isn’t done yet.

Australia is without a male player in the world top 100 and the three leading men in the squad, Cameron Pilley, Ryan Cuskelly and Zac Alexander, are all coming out of retirement from the PSA World Tour to pull on the green and gold shirts in Birmingham. But the accent is still on gold.

All three have won gold medals in the doubles competitions and their experience will be invaluable during an 11-day tournament when the top seeded singles players may well find the going tough by diving straight into the doubles the day after the singles finals.

Pilley, the hardest hitter of a squash ball on record with a smash hit clocked on the Squash Mad radar gun at 178mph, has three gold medals. He won gold in Glasgow alongside David Palmer in the men’s doubles, his winning shot against the England pairing of Nick Matthew and Adrian Grant proving the final sporting moment of the whole Games.

He had also won a gold in the mixed doubles with Kasey Brown in Delhi in 2010 and claimed another gold in Gold Coast four years ago, partnering his cousin Donna Lobban in the mixed event.

In a brilliant interview on the Squash Australia website, Grinham talks about her long career.

“When I was playing on the Gold Coast in 2018, I wasn’t looking at playing this one,” Grinham commented. “I wasn’t ruling it out, but it seemed as though I had a good chance as the years have gone by.”

“I was about three years old when I started hitting the ball,” Grinham recalled.

She won her first Junior World Championship at the age of 16. In 1994 she joined the Women’s International Squash Players Association (WISPA) World Tour, breaking into the top 20 in mid-1997.

A little over a year later, Grinham was 21 when she was selected for her first Commonwealth Games team for Kuala Lumpur 1998 as squash appeared for the first time.

Grinham reached the women’s doubles final with former world no.12 Robyn Cooper and they finished runners-up to England’s Sue Wright and Cassie Jackman.

Four years later at Manchester 2002, she captured bronze in the women’s singles (one of seven Australian players to win a singles medal at this level) before partnering with her younger sister Natalie in the doubles for bronze.

Grinham became the world No. 1 in August 2004 and held on to it for 16 consecutive months. She won titles throughout the 2000s, including three World Team Championship titles, three World Doubles titles, a World Championship, plus four British Opens.

Out of all her titles though, one of her favourite victories came at the Melbourne 2006 Commonwealth Games

“I played my sister in the final of the singles (winning silver) and then we played together in the doubles and won gold so that’s definitely one of the highlights of my career,” Grinham said.

“I would like to medal,” said Grinham when asked about her Birmingham 2022 goals. “We’ve got some great doubles pairs but in doubles any team can win on the day and matches can go either way.”