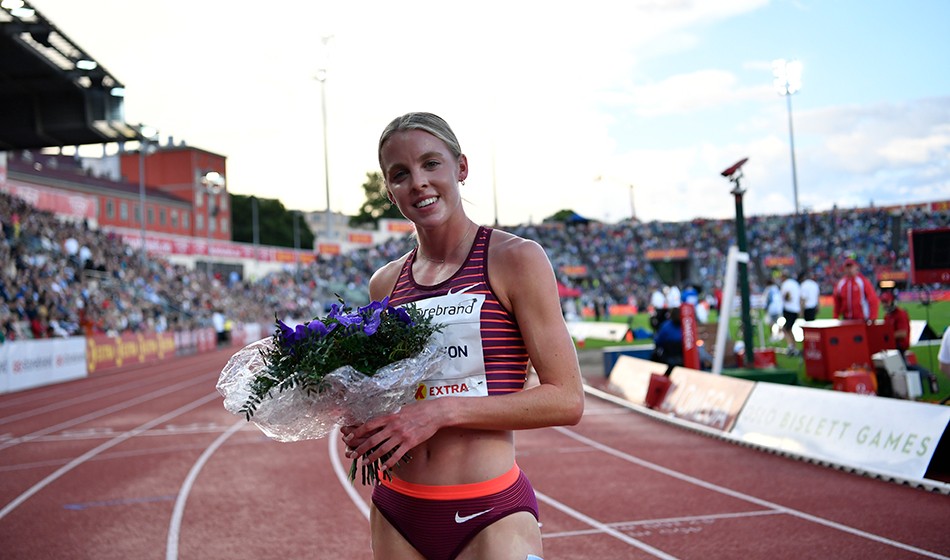 Keely Hodgkinson enjoyed another impressive 800m victory at the Diamond League in Oslo on Thursday (June 16) and then told AW she plans to tackle the 400m at the UK Athletics Championships in Manchester next week.

The 20-year-old looked slightly disappointed that she ran ‘only’ 1:57.71 but was pleased to post another convincing win against top-class opposition as Laura Muir finished strongly to finish runner-up in 1:58.09.

Such was the quality of the race Jemma Reekie broke two minutes with 1:59.83 but finished eighth.

Pacemaker Aneta Lemiesz led through the bell in 57.2 with Hodgkinson hot on her heels. The Olympic silver medallist assumed pole position down the back straight with Renelle Lamote of France close behind, but the Briton then pulled clear around the final bend and held her advantage in the home straight.

“I was fairly happy but I wanted faster,” Hodgkinson said. “A win is a win though. It was great to have that race with Laura and she’s running well.

“I’m not doing the 800m at trials but am doing the 400m instead.” @keelyhodgkinson chats to @stuartweir and confirms her British trials plans after winning the 800m at @BislettGames in 1:57.71 ?#OsloDL ? pic.twitter.com/vAvJokXPv6

The home crowd had plenty to cheer, though, as Karoline Grøvdal led into the back straight on the final lap and, despite being out-kicked by the Ethiopian trio, she held on to break Ingrid Kristiansen’s 36-year-old Norwegian record by six seconds with 14:31.07 as Alicia Monson of the United States and another Ethiopian, Almaz Ayana, followed close behind in fifth and sixth.

“It’s a big day for me,” said Grøvdal, “the national record has been a big focus for so long. I wanted it so badly so I decided to take the lead when the race became tactical. The crowd definitely helped me and I didn’t think about the rain during the race.”

Top Brit was Jess Judd in 15:00.07 while Eilish McColgan dropped out.

Femke Bol’s fine season continued as she beat Deon Hemmings’ 25-year-old meeting record of 53.18 with 52.61 despite stuttering into the final hurdle.

World No.1 discus thrower Valarie Allman, meanwhile, was beaten by Sandra Perkovic as the Croatian maintained her fine Bislett Games record by throwing 66.82m ahead of the American’s 65.91m.

In the women’s shot put, the British-based American Chase Ealey threw a 20.13m PB in the final round to win as runner-up Jessica Schilder threw a Dutch record of 19.46m.

More in this category: « Brigid Kosgei powers to women’s win in London Rise of marathon runner Becky Briggs »
back to top