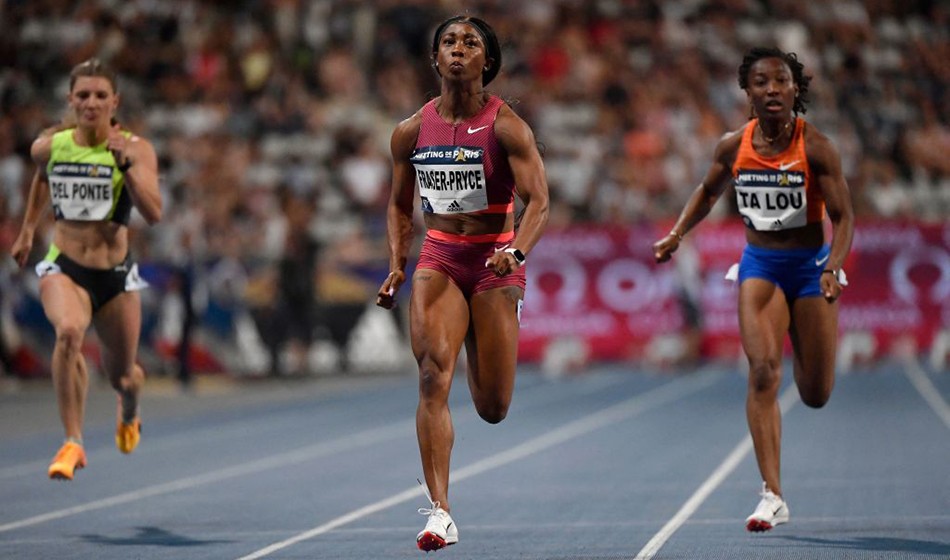 Shelly-Ann Fraser-Pryce sent out a warning shot to her sprint rivals ahead of next month’s World Championships as she blasted to an emphatic win in the women’s 100m at the Meeting de Paris on Saturday (June 18) in 10.67 (0.5).

The time equalled the world lead and beat Elaine Thompson-Herah’s meeting record of 10.72 from last year.

In second, Britain’s Daryll Neita also broke the 11-second barrier with a season’s best of 10.99.

With heatwave conditions across much of Europe, temperatures in Paris were still over 30C during the meeting and the athletes largely seemed to relish it in the Stade Charléty.

The heat did not suit distance runners, though, but nevertheless there were some sparkling performances in the women’s 3000m steeplechase. Winfred Mutile Yavi – a Kenyan-born runner who represents Bahrain – clocked a world lead of 8:56.55 as Lizzie Bird improved her British record from 9:19.68 to 9:19.46 in fourth place.

Bird, 27, only took up the steeplechase after being persuaded to try it by a cross-country coach at Princeton University. She is now studying immigration law in Colorado and is building into even better form than last year, when she finished ninth in the Olympic final in a UK record.

A terrific men’s 800m saw Benjamin Robert produce an inspired final surge to win in a PB of 1:43.75 – and to the delight of the home crowd he later survived a disqualification scare for allegedly pushing his way to victory.

After the pacemaker led through the bell in 49.74, the race looked to be between Tual and Tony van Diepen of the Netherlands with 50 metres to go. But Robert, who was fifth and seemingly struggling with 150m to go, muscled his way through with a dramatic late burst to win.

With the athletes relishing the warm conditions, Tobi Amusan of Nigeria clocked an African 100m hurdles record of 12.41 (-0.4) as Cindy Sember showed good form ahead of the UK Championships with 12.73 in third.

Yaroslava Mahuchikh was in majestic form in the women’s high jump as the Ukrainian cleared a world-leading height of 2.01m to win.

She led a Ukrainian sweep of the top three places, too, as Iryna Gerashchenko was runner-up with 1.98m and Yuliya Levchenko equal third with Nicola Olyslagers of Australia, both of whom jumped 1.95m. In seventh, meanwhile, Olympic heptathlon champion Nafi Thiam of Belgium cleared 1.92m.

Cubans were to the fore in the men’s triple jump with Jordan Alejandro Diaz Fortun jumping 17.66m to beat his compatriot Andy Diaz by one centimetre.

Olympic champion Pedro Pichardo of Portugal was third with 17.49m as American Christian Taylor, on the comeback trail from injury, jumped 16.54m.

One week before the UK Champs in Manchester, Harry Coppell cleared a best of 5.50m in a pole vault competition won by Ben Broeders of Belgium with 5.80m, beating Renaud Lavillenie on countback.

Shaunae Miller-Uibo won the women’s 400m at a canter but her time of 50.10 did not do justice to her run. Easing down massively in the closing stages, the Olympic champion from the Bahamas could have smashed the 50-second barrier if she had not shut down several metres before the finish.

In a rare Diamond League appearance, Steven Gardiner, also of Bahamas, was a similarly comfortable winner in the men’s 400m as he clocked 44.21. There had been hopes that Matt Hudson-Smith might improve on his recent UK record of 44.35 but he did not start.

In the women’s discus, the Valarie Allman and Sandra Perkovic rivalry could be one of the highlights at the World Championships in Eugene and here the American beat the Croatian by half a metre with a meeting record of 68.68.

The conditions weren’t ideal for distance runners, though, which made Selemon Barega’s 5000m win all the more impressive as he ran away from Thierry Ndikumwenayo of Burundi and world champion Muktar Edris of Ethiopia to win by nine seconds in 12:56.19.