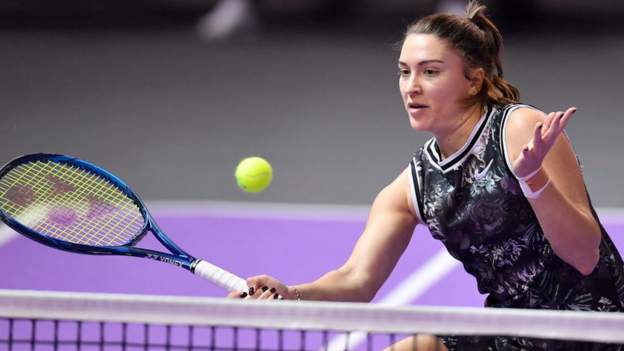 Russia-born doubles player Natela Dzalamidze will be able to compete at Wimbledon after changing her nationality to represent Georgia.

Wimbledon has banned Russian and Belarusian players this year because of the Russian invasion of Ukraine.

Dzalamidze, 29, is on the Wimbledon entry list as Georgian, having competed at the French Open in May under a neutral flag as Russians had to.

She is set to partner Serb Aleksandra Krunic in the women's doubles.

The grass-court Grand Slam starts on Monday, 27 June, with Russian world number one men's singles player Daniil Medvedev among those barred from competing.

The All England Club said it has no involvement in players' change of nationality, saying in a statement: "Player nationality, defined as the flag they play under at professional events, is an agreed process that is governed by the tours and the ITF (International Tennis Federation)."

The women's tour, the WTA, was not immediately available for comment.

Dzalamidze, beaten in the first round of the women's and mixed doubles at Roland Garros, is ranked 43rd in the world in women's doubles.

More in this category: « Britain's Dart makes US Open main draw for first time Wimbledon: Andy Murray says injury 'healing but not perfect' before Grand Slam »
back to top