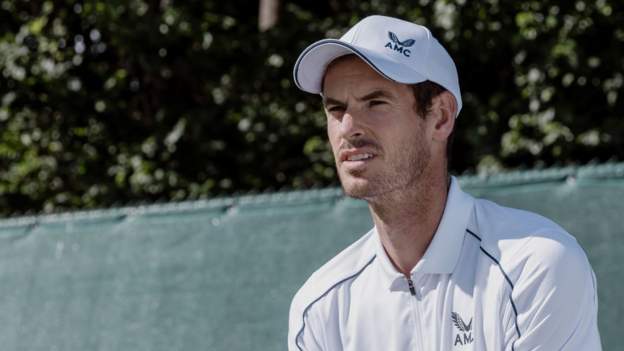 Britain's Andy Murray faces a race against time to play Wimbledon because of the abdominal injury that forced him out of Queen's last week.

The two-time Wimbledon champion said there had been "positives and negatives" during practice this week.

The Grand Slam event starts at the All England Club next Monday and Murray, who won in 2013 and 2016, says he is still unable to hit certain shots.

"The injury is healing but still not perfect," the 35-year-old Scot said.

On his hopes at Wimbledon, he added: "My goal is to get to the start line in a good place physically and give myself the best chance to do well."

Murray picked up the injury in the Stuttgart final last week and as a result withdrew from Queen's a day later.

The former world number one had a scan on 13 June in London and decided to skip the Cinch Championships after it revealed the level of the damage.

Murray, now ranked 51st in the world, has been practising on the grass at Wimbledon this week, hitting with British number two Dan Evans and fellow three-time Grand Slam champion Stan Wawrinka.

Murray said he does not plan to play an exhibition event at the Hurlingham Club in London this week, where defending Wimbledon champion Novak Djokovic and 22-Grand Slam champion Rafael Nadal are among those in action.

"There have been positives and negatives this week," the former world number one said.

"But unfortunately in matches you can't just not hit certain shots. In the next couple of days hopefully I will get the chance to test that and hopefully it will be fine."

Murray would not reveal which specific shots he has been unable to practise but said: "I'm sure you can work that out based on what the injury is."

In the final stages of the Stuttgart final against Italy's Matteo Berrettini, Murray was unable to serve properly.

"I've missed out on some of the stuff I'd have liked to do," added Murray, who was speaking at the launch of his AMC clothing range in which he will be playing at Wimbledon.

"But hopefully in the next couple of days it will hopefully improve and we will get back to normal preparations."

More in this category: « Britain's Dart makes US Open main draw for first time Wimbledon: What has changed at grass-court Grand Slam for 2022? »
back to top