KJT back on top with heptathlon gold 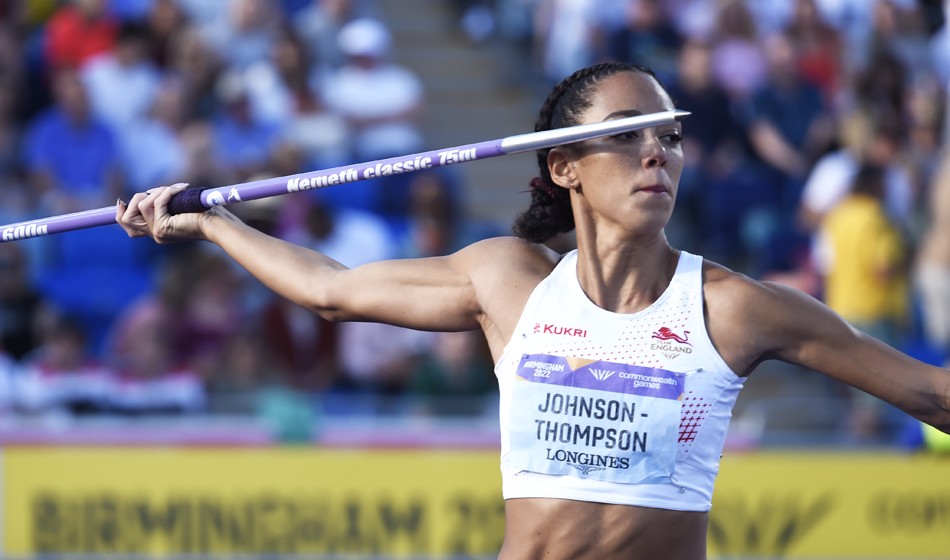 Katarina Johnson-Thompson has not quite rediscovered all of the speed, strength and stamina that brought her the world title in 2019 but her old form is slowly coming back, piece by piece. Her throwing arm, for starters, is better than ever. Her smile has also returned and she beamed with delight after successfully defending her Commonwealth heptathlon title in Birmingham.

On Wednesday night she threw a lifetime best of 44.33m in the javelin, the penultimate event of the competition. It was her first PB for three years and, already leading at that point, it effectively sealed victory. The 800m was something of a formality as she clocked 2:13.93 to take gold.

“It feels incredible to do that in front of my home crowd,” she said. “It was the crowd who got me through the competition, especially the 800m when the noise was so loud. You know when you [usually] feel pain, you didn’t feel it, so I have got them to thank them for that performance.”

Johnson-Thompson’s injury problems have been well documented, particularly an Achilles rupture that needed surgery. Her Olympic dream in Tokyo was ruined by another injury and she has switched coaches from Bertrand Valcin to Petros Kyprianou to Aston Moore, as well as moving from France to America and back to her home in Liverpool in search of success.

Last month she finished eighth at the World Championships in Eugene with a score of 6222 – well behind her British record of 6981 – but you had the feeling she was feeling her way back into form ahead of the Commonwealth Games.

Here in Birmingham she scored 6377 to win the ninth international gold medal of her career. A measure of the performance was that it was better than the 6255 she scored to win the Commonwealth crown on the Gold Coast in 2018.

Behind Johnson-Thompson, Kate O’Connor scored 6233 to win silver for Northern Ireland, with Jade O’Dowda of England third with 6212, Holly Mills of England fourth with 6095 and Taneille Crase of Australia fifth with 6026.

The competition began on Tuesday morning with Johnson-Thompson clocking 13.83 in the 100m hurdles before high jumping 1.84m and throwing 12.94m in the shot put. She then won the 200m in 23.70 to hold an overnight lead of 109 points ahead of O’Connor, with Crase third and Mills fourth.

In the long jump on Thursday morning Johnson-Thompson got an opening mark of 5.61m in the bag, followed by 6.28m and 6.33m to solidify her position with a 122-point lead over O’Dowda, who jumped an excellent 6.52m (2.1) with Crase third and Mills fourth.

Then came the javelin. Similar to the long jump, Johnson-Thompson got an early mark in the bag with a 36.19m effort. However, with her second throw she reached a pleasing 41.37m and then, with her third and final effort, improved to a PB of 44.33m.

Clearly delighted, she danced away from the runway celebrating. Her previous best of 43.93m had been set when winning the world title in Doha three years ago. O’Connor, meanwhile, threw 51.14m to move back into second place overall.

In the final event Mills blasted around in 2:11.42 with Johnson-Thompson in second place as she sealed the title, much to the delight of the 30,000 capacity home crowd.

Katarina Johnson-Thompson has done it! The 2019 world heptathlon champion has retained her Commonwealth title for @TeamEngland with 6377 points ????????#B2022 pic.twitter.com/ZVurPZzolU

Sarah Mitton of Canada was favourite to win the women’s shot put title but she only secured victory in the sixth and final round when she threw 19.03m to overhaul Danniel Thomas-Dodd, the Jamaican who had led with 18.98m.

Thomas-Dodd, the defending champion from 2018, held on to the silver medal as Maddison-Lee Wesche of New Zealand took bronze with 18.84m.

The men’s high jump title, meanwhile, was won by Hamish Kerr of New Zealand with 2.25m on countback from Brandon Starc of Australia.

Tejaswin Shankar of India took bronze with 2.22m as former champion Donald Thomas of Bahamas and England’s Joel Clarke-Khan, who also jumped 2.22m, just missed out on a podium place.