Denny and co light up drab night in Birmingham 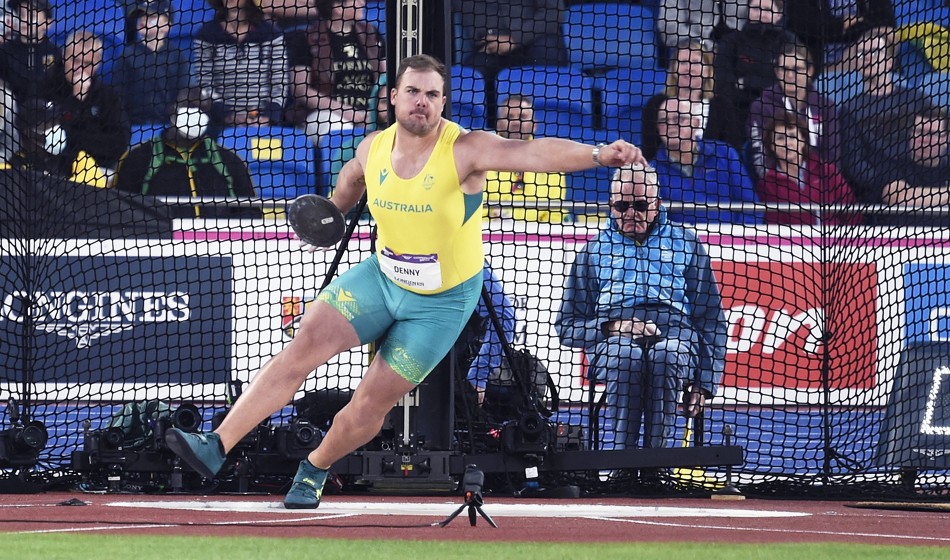 After a wonderful Wednesday night featuring victories by Eilish McColgan and Katarina Johnson-Thompson, Thursday evening at the Alexander Stadium fell flat in comparison. From one of the greatest domestic athletics sessions in recent history, a relatively thin programme played out in chilly temperatures of 14-15C.

Highlights for English fans included a silver medal for Lawrence Okoye in the discus and bronze for Andy Pozzi in the sprint hurdles. Although many of the spectators began filing away after the final track event – the men’s 110m hurdles – leaving Okoye to celebrate his medal moment in front of largely empty stands.

The 26-year-old won silver in the hammer and was fourth in the discus at the 2018 Commonwealth Games on his home soil and in Birmingham he improved on the 67.02m PB that earned him fourth place in the Olympic final in Tokyo last year.

It is the first medal from an English athlete in this event since Bob Weir in 2002 and represents a great return to form for a man who put athletics on the back burner for seven years to play American Football.

The Croydon Harriers athlete was originally a rugby player but took up discus in the run-up to the London Olympics in 2012 and broke the British record and reached the Olympic final aged 20. He then quit the sport in order to pursue a career in NFL, though, before returning to athletics three years ago.

The men’s sprint hurdles final was certainly eventful as Rasheed Broadbell of Jamaica defied the chilly conditions to equal Colin Jackson’s championship record of 13.09 from 1990.

Shane Brathwaite of Barbados took silver in 13.30 as Andy Pozzi snatched bronze with 13.37 after clipping the final hurdle, losing his balance and falling dramatically over the line. For the 30-year-old English hurdler it was his 10th major outdoor championships and first medal.

Joshua Zeller, his English team-mate, narrowly missed out on a podium place as he finished fourth in 13.39 just a couple of weeks after making the world final in Eugene.

Hansle Parchment, the Olympic champion from Jamaica, did not start due to injury – a blow for the crowd on an already slow night – but his nation still managed to win the title.

For Broadbell it signalled something of a redemption too as he was disappointed to miss out on Olympic selection last year.

“I knew I had to stay focused and that is what I did,” said the winner. “Sometimes, when you run, you don’t know what is going to happen. You just have to execute properly.”

LaQuan Nairn of the Bahamas won a men’s long jump title where the top four athletes were separated by only three centimetres. The 26-year-old jumped 8.08m (0.1) in the second round as the runner-up Murali Sreeshankar of India also jumped 8.08m (1.5) with Nairn’s superior second-best leap of 7.94m (to Sreeshankar’s 7.84m) deciding the title.

Unusually there were no representatives from the home nations among the 12 finalists.

Five days after winning the women’s wheelchair marathon title on the roads of Birmingham, Madison de Rozario won the T53-54 1500m in 3:53.02 ahead of fellow Australian Angela Ballard with Scotland’s Sammi Kinghorn a close third.

After a slow start, De Rozario began to push the pace on the third lap and surged into a lead of around five metres with 300m to go. But Kinghorn, who was sitting in third, made a big move down the back straight to move into second and then tried to attack into the home straight but De Rozario found something extra to maintain her lead as Kinghorn narrowly lost out to Ballard for silver.

“I realised I was going to be out front from one lap in,” said the winner. “When you commit to taking the lead, you have to just back yourself.”

With para-athletics events integrated into the main programme more than ever before, Thursday night also saw a number of other para finals. Ndodomzi Ntutu of South Africa won the T11-12 100m in 10.83 (3.7) ahead of England’s Zak Shaw, who clocked 10.90.

Elsewhere, Lindon Victor leads the decathlon overnight with 4327 points after results that included 10.76 in the 100m, 7.46m in the long jump, 15.48m for the shot put, 2.03m for the high jump and 49.51 for 400m. The Grenada athlete is the defending champion and was fifth at the World Championships last month.

Cedric Dubler of Australia lies second with 4242 with the leading athlete from the home nations ahead of the final five events on Friday being Harry Kendall of England in sixth with 3924.