Lina Nielsen: “I wouldn’t wish it upon my worst enemy, experiencing paralysis” 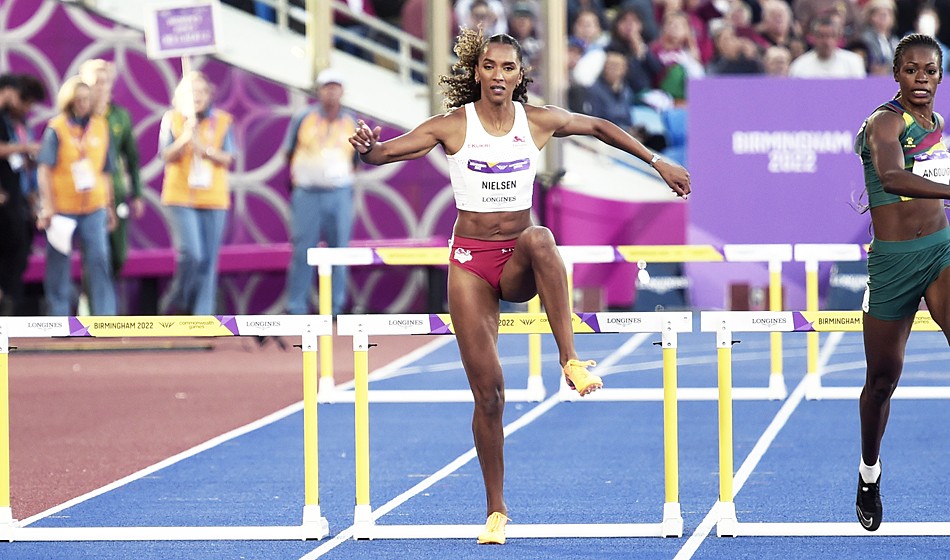 Lina Nielsen is a 400m hurdler who told her story and it transcended an entire sport.

In an exclusive interview with The Telegraph, the 26-year-old said that for half of her life she had multiple sclerosis and was diagnosed with the condition nine years ago.

A relapse occurred just a day before her heats at the World Championships in Oregon.

Failing to qualify for the semi-finals was an irrelevance compared to what followed. After keeping her diagnosis of multiple sclerosis to just a small circle of friends, family and a select number of team-mates, Nielsen revealed to the world that she had been diagnosed with multiple sclerosis just before her 18th birthday. Anything that occurred on the track suddenly became second fiddle.

“It’s a lot to deal with and I wanted to share my piece and the strength and bravery that I’ve had to go through as I want to inspire other people,” she says, after finishing her 400m hurdles heat at the Commonwealth Games. “My goal in sport regardless of my condition is to inspire. I was inspired into the sport and I want to inspire while I’m in the sport. This is my way of doing it.

“I’m quite a private person when it comes to my life anyway so I feel a bit vulnerable but that’s a good thing. My team-mates and friends and family knew [about the multiple sclerosis]. It wasn’t like a big secret but it was something that I just decided not to publicise.”

“I’m quite a private person when it comes to my life so I feel a little vulnerable but that’s a good thing.”

After revealing that she has multiple sclerosis, @LinaFJNielsen wants to inspire others with her platform and says she’s had MS for 13 years.

Nielsen states that she went into the World Championships in the best shape of her life. This isn’t hard to work out given she set a personal best of 54.73 in the 400m hurdles on June 9 at the Rome Diamond League.

Even after her relapse in Oregon, the prospect of making her Commonwealth Games debut, in front of a 30,000 sell-out home crowd in Birmingham, was too much of an opportunity to miss.

“I am still navigating recovery,” she adds. “I did have right-sided weakness up until Monday this week. Not long ago, I couldn’t really walk normally. I was limping walking my dog in the park.

“I would have run anyway. It’s a home crowd. The last time we experienced a crowd like this was London 2012. It is not something that comes round very often. It was always the goal for this season, to do the Commonwealth Games. So the moment I started winter’s training it was the goal and I couldn’t pull out just because I am not 100%.

“I am 10% out of shape. I am not 100% either. I am somewhere in-between. The whole point of sport is going out there and giving it your best shot, I did that, and I got what I wanted from my Commonwealth Games.”

Over the last decade the athletics world has got used to seeing not one but two Nielsens on track. Her twin sister Laviai, who won world 4x400m bronze in Eugene, burst on the scene in 2015 when she claimed 400m gold at the European Junior Championships. Since then she’s become a double world 4x400m medallist and double European Indoor champion.

To say the two are close is an understatement. Both have followed each other into the sport but more importantly been there for each other when times got tough.

When Lina was 13 her left arm turned numb – the first time that she experienced the effects of multiple sclerosis – but it wasn’t until 2017 when what was previously unknown manifested into something much more serious.

Lina’s multiple sclerosis had flared up so badly that she couldn’t move her right leg and arm and was essentially paralysed down the right hand side of her body.

Laviai was there every second of the way.

“Even though I couldn’t move my right arm properly, I would still go to school, I would still study, I would make sure I would do what a normal 18-year-old would do. She would brush my hair for me. I did come to sports eventually when I was 18 years old. She was going through a great season, as she went to the world juniors in Eugene in 2014. I was trying to navigate whether I wanted to do sports.

“I’d say I didn’t have what a normal 18-year-old would have. You know, you are at the legal drinking age, you can go out. I was so sad and would have to navigate that. It took me a long time to process it. I think the reason I didn’t tell people at first is that I didn’t believe it myself. I went through denial a little bit.

“When I was turned 21 or 22, I tried to embrace it, research on people’s stories, my good friend Kadeena [Cox] helped me through my diagnosis. I reached out to her, I talked to her about it. I did more research. It took me about three years to process it and accept it.”

she’s spent the last 2 weeks recovering, mentally as well as physically. and went out there and gave it everything ???

The problem with multiple sclerosis is that twins are more susceptible to both having it at some point in their lifetimes compared to older and younger siblings for example.

When Laviai had an adverse reaction to the Covid-19 vaccine last year, lasting longer than it should have, she was checked out by doctors given Lina’s previous diagnosis back in 2017.

What they found, according to Lina, is that while Laviai has never displayed any symptoms of multiple sclerosis, the results concluded that she most likely had it as well.

Lina kept the news from Laviai for two months because she feared she would get it too.

“At the best of times you are already struggling with life as it is, going through puberty and what a normal teenager would go through,” Lina said. “I just remember feeling really guilty and I don’t know why. I felt like it was my fault that she may have to go through what I went through.

“I’d say I wouldn’t wish it upon my worst enemy, experiencing paralysis. But my best friend to experience that – absolutely not. I just felt guilty. Okay, I have gone through this, now it is going to be my fault if she goes through this. It was a lot of sussing myself up to tell her, I am sorry you may have to go through this as well.

“The only way I can describe it is that it felt like guilt. It took a long time for me to tell her. When I did, she was like, ‘why didn’t you tell me?’ I didn’t know how to. Since then she has been such a massive support.”

One thing is certain though and that it both sisters have a deep love for track and field and will do whatever it takes to support each other both in and out of competition.

Does Lina think she can still make Olympic and world finals with multiple sclerosis? Absolutely.

“I never know when the relapses are going to happen. I didn’t think it would happen the day before my world champs! But I can still running fast. I am still running with some of the fastest people in the world. I am still one of the fastest people in the world. Even over 400m flat. I can still run quite fast. It doesn’t hinder me on a day to day basis. I know a lot of people with multiple sclerosis that it does. But for me, it’s very much periods of healthy and then an odd week it affects me.”

She reveals she will get a TUE [therapeutic use exemption] for anti-inflammatories but hasn’t taken medication yet.

The future is uncertain when it comes to the disease but what is unwavering is the support. For both of the Nielsen sisters this is about using their platform to share the message and relate to others.

A lot of people are saying I am a big inspiration and have given them motivation,” Lina adds. “Which is literally all I wanted to do to inspire people and give people that kick. I have had so many heartfelt messages and I want to sit down and reply to every single one.

“I just know it takes a lot to reach out to someone and say you are going through this. It has not been overwhelming but I didn’t expect such a really positive response.”