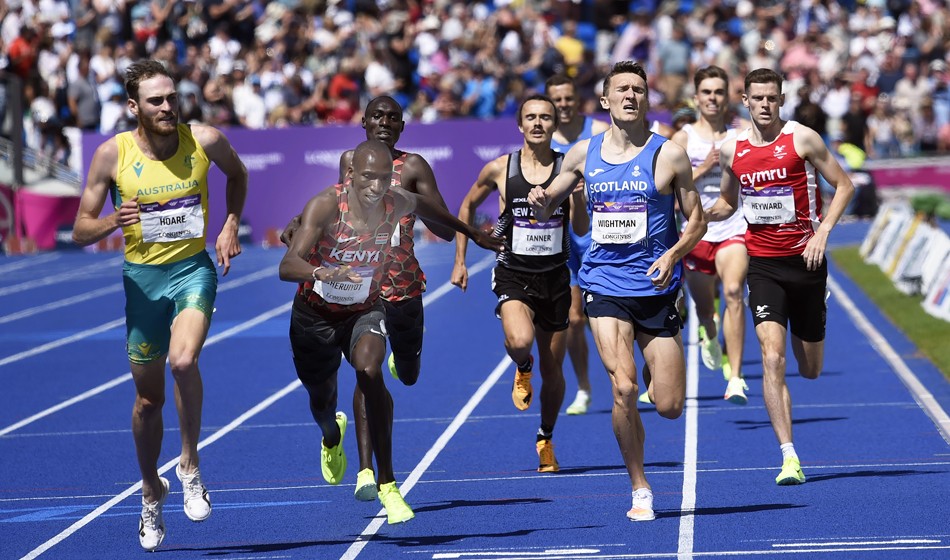 The race of the Games did not disappoint. On paper the men’s 1500m looked a cracker with world champion Jake Wightman taking on a top-class field of milers. So it proved as Olli Hoare won gold in a thrilling finish in 3:30.12.

The 25-year-old became the first Australian to win this title since the great Herb Elliott took the equivalent one mile crown in Cardiff in 1958. What’s more, Filbert Bayi, who was in the Alexander Stadium stands as part of the Tanzanian team, saw his iconic Commonwealth Games record of 3:32.16 from 1974 beaten by six men.

Eight of the finalists set PBs with Jake Heyward setting a Welsh record of 3:31.08 in fifth and Matt Stonier of England taking three seconds off his PB in seventh. Hoare was also among those to run lifetime bests as he took two-and-a-half seconds off his best.

The race began in bright sunshine and temperatures of 25C on Saturday lunchtime in Birmingham. Abel Kipsang led through the first lap in 54.87 with fellow Kenyan and 2019 world champion Timothy Cheruiyot taking the field through 800m in 1:52.15 and 1200m in 2:49.09 – an expected tactic by the east Africans to keep the pace fast.

Down the back straight for the last time Cheruiyot and Kipsang led with Wightman close behind running wide and Hoare tucked on the inside. Approaching the 200m mark Wightman made the same move that brought him the world title as he kicked into the lead. Problem was, he did not feel as good as he did in Eugene.

“It was an instinctive move,” he said, “but I didn’t feel the same pop.”

In Eugene he looked in control entering the home straight as he powered away from Jakob Ingebrigtsen. Here he looked there to be shot at with the two Kenyans close behind and regrouping themselves as Hoare moved out wide to attack.

Into the home straight Cheruiyot came past Wightman again with Hoare also finishing quickly and then in a desperate final few metres the Kenyan seemed to lose his momentum approaching the line and Hoare kept his form to come past to win by nine hundredths of a second with Wightman holding on for third.

Behind, Heyward had mixed feelings after a big PB yet no medal. Stonier said he was “thrilled” with his big PB and a top eight finish in such a stacked line up. Neil Gourley and Elliot Giles did not quite have the strength to contend for medal places after, for Gourley, a recent bout of Covid and, in Giles’ case, an eight-week injury spell at the start of the season.

Will Paulson, who won the English Schools 1500m title on the same track in 2013 but has since switched to Canada, was 10th. Such was the quality of the race, Olympic bronze medallist Josh Kerr wound up last but still ran 3:35.72.

“It was so tough,” said Hoare, who was competing in his first Commonwealth final. “It was a privilege to represent my country in a field that was so deep. The race was fast but I’d been training for a hard pace. I ran 3:47 (for the mile) in Oslo so I knew I had the strength there and it was just a case of timing my kick at the right time.

“When I came into the home straight I pulled out into lane three and it was all about holding my form and running like bloody hell – and I was able to get it.”

Hoare was a swimmer when he was younger but soon began to show more talent as a runner. His father was a good runner and a world beach running champion and, growing up in Australia, Hoare began to follow in his footsteps.

After winning Australian titles in his teens he moved to the United States to study at the University of Wisconsin and is currently a member of the On Athletics Club based in Colorado where he is coached by former US distance running star Dathan Ritzenhein.

His form has been impressive in the last couple of seasons, too, as he and fellow Australian Stewart McSweyn have made a huge impact in international middle-distance races. Hoare beat Kerr convincingly in the Wanamaker Mile earlier this year at the Millrose Games and then clocked a 3:47.48 Oceania mile record at the Bislett Games in June. However he bombed out in his semi-final at the World Championships in Eugene, which meant he went into the Commonwealth Games final as something of a dark horse.

Those familiar with his early season form will not have been surprised to see him win, though. This summer’s remaining Diamond League meetings aside, it will also be interesting to see what he can do at the World Cross Country Championships on home soil in Bathurst next spring as he says that is now one of his main goals.

“We have an amazing group of guys and we want to make some damage there.”